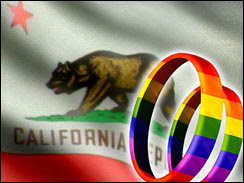 So here's an Op-ed from earlier this week in the L.A. Times. Note that it ran on June 17th -- the first official "Marriage Equality Day" here in California. And note that it offers a concise summary of what are guaranteed to be some key points in the argumentation we'll hear as we move toward the November election and the "let's put bigotry back into the Constitution" ballot initiative.

Early this morning, gay and lesbian couples were surely lining up at county clerk's offices across the state to exercise their new right to marry, bestowed on them last month by the California Supreme Court.In its controversial decision, the court insisted that these same-sex marriages would not "diminish any other person's constitutional rights" or "impinge upon the religious freedom of any religious organization, official or any other person."

And yet there is substantial reason to believe that these assurances about the safety of religious liberty are either wrong or reflect a cramped view of religion.

It's a page off the same playbook the Episcopal neo-cons have been using "lo these many years" -- trying to reframe the story to spin the inclusion of the LGBT faithful as an act of discrimination against "the orthodox" (See also: We're The Victims Here!) and dragging out a whole school of red herrings to sling around in the process.

That said, as tempting as it might be, we'll be well served to not just "blow off" this op-ed or the others like it that are already in the pipeline.

The battle to secure Marriage Equality by defeating discrimination in November has already begun.

So we need to be simultaneously celebrating with GREAT joy those couples who are now living "happily ever after" in the state of wedded bliss AND concentrating with GREAT intentionality on owning the message and framing the story to preserve that right for those who come after us.

Kudos to Stephanie Campbell, Welton Gaddy and Kari Tervo who all had Letters to the Editor printed in today LATimes in response to Stern's op-ed. Let's get working on our OWN "talking points" ... and be ready to get them out there in the days and weeks and months to come!
.

Hi Susan, we recently had an ugly op-ed here in Boston in the wake of the CA equal marriage decision, and they published the letter I sent in its wake. Here it is, in case it's useful to you all in CA.

Time changes people and the definition of marriage

JEFF JACOBY'S comments about equal marriage in California are predicated on a falsehood, namely that his understanding of marriage is "timeless." What is undoubtedly timeless about human beings is that we change. As I see it, precisely because human beings change throughout our lives, those of us who marry choose to marry the one we love because we want to grow and change with that person. Marriage then becomes a vessel of that transformation.

Lesbian, gay, bisexual, and transgender people tend to know a thing or two about change and others' reaction to it.

Based on my own experience, I would say, expect change, engage it thoughtfully, and respect its presence in the lives of others.

Increased acceptance of equal marriage in the United States does represent a cultural shift but, as we know from the transformation of marriage here in Massachusetts, change need not bring the world to an end.