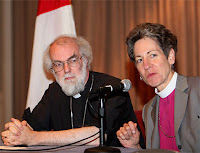 Episcopal Presiding Bishop Katharine Jefferts Schori said last Tuesday that she does not expect up-or-down votes on the role of gays and lesbians in the church at a meeting of global Anglican leaders in England this summer.
The Lambeth Conference, a once-a-decade gathering of bishops from the 38 provinces of the worldwide Anglican Communion, will instead be an opportunity for bishops to work out differences in closed-door discussion groups, according to organizers.

"I don't expect legislation at Lambeth. That's not why we're going," Jefferts Schori told reporters. "It's a global conversation. ... It's not going to make a final decision about anything." .
The article concluded with this tidbit about GAFCON:
.
Jefferts Schori said Bishop Robert O'Neill of Colorado will attend GAFCON on behalf of the U.S. church.
.
The presiding bishop also said she looks forward to the newly designed Lambeth Conference.
.
"The reality is that parliamentary procedure, including the way it's practiced in this country, leads generally to winners and losers," Jefferts Schori said. "When we meet face to face, we have far more opportunities to meet each other as complex human beings rather than as single-issue positions."
.
Posted by SUSAN RUSSELL at 8:16 AM

Given the president of the deputies' comments (below) and the comments of Dr. Williams, I think it clear the leadership is not unified in its view of the near future. Of course if a complete breakdown of the process is what you pray for (moi) in the belief that we need a new starting point, this is good news.

three causes for hope perhaps:
1)these are not absolute strangers, with nothing in common meeting they are men and women of a common faith tradition and history
2)they won't just be 'meeting'; they'll be praying and studying together and sharing the Eucharist.
3) and outside the palace they'll be our radiant 'clouds of witness-' our LGBT brothers and sisters to keep them real.