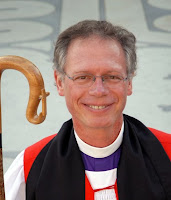 [ENS] By Pat McCaughan, June 11, 2008
.
Andrus called the May 15 California Supreme Court decision a "prophetic opportunity" and noted that the church has worked for full inclusion and to further the rights of LGBT people for 40 years. Continuing those efforts will include "bringing the witness of our LGBT sisters and brothers to this summer's Lambeth conference," the July 16-August 3 decennial gathering of bishops from across the Anglican Communion at the University of Kent in Canterbury, England, Andrus said.
.
Andrus also said he opposes a November 4 ballot initiative to amend the state constitution to limit marriage to a man and a woman. If passed, it would overrule the Supreme Court decision, which struck down an eight-year-old ban on gay marriage. The court on June 6 refused to stay its decision, paving the way for same-sex couples to legally marry starting June 17.
"The Diocese of California will publish advertising around June 17 celebrating the Supreme Court ruling and inviting same-sex couples to our churches for pre-marital counseling and nourishment in communities of faith," Andrus said. .
.
Full inclusion will also mean "providing leadership at next summer's General Convention to bring our marriage practices and theology in line with our fundamental baptismal theology," Andrus added.
.
Integrity's Russell, an associate priest at All Saints Church in Pasadena, California, said Andrus' actions "go the extra mile" by shifting the burden for past inequities away from those who are marginalized and by "offering straight couples the opportunities to step up and share that inequity."
By "encouraging all couples to do the civil union separate from the blessing of the church … that's now what gay and lesbian couples have," said Russell, who said she'd just returned from preaching at the June 7 ceremony celebrating the civil union of Bishop V. Gene Robinson and his long-time partner, Mark Andrew, in New Hampshire.
Robinson and Andrew held two services—a secular service in which they became legal partners followed by a blessing of their relationship at St. Paul's Church.
Russell said that requests for weddings have increased at All Saints, Pasadena, which has included a "One-stop Shop for Marriage Equality in California" link on its website, with several same-gender weddings "coming up quickly," on or around June 17.
"We're not changing our policy (regarding weddings), but we are opening it up to comply with the laws of the state of California," she said. That policy require couples to receive mandatory premarital preparation and that at least one person belong to the church, with some exceptions.
California has an estimated 108,734 same-sex households, according to 2006 U.S. Census figures. The state offers same-sex couples registering as domestic partners some legal rights and responsibilities afforded to married couples, including the right to divorce and to sue for child support.
Proponents of the November 4 ballot initiative hope to add California to the list of 26 states that have approved constitutional amendments banning same-gender marriage. If passed, it is unclear how the measure would affect the status of marriages performed prior to November 4.
Russell called the court ruling "an unasked for, but extraordinary opportunity to examine what we mean by the sanctity of marriage.
All Saints has received support from its congregation and across the church, "from straight couples (who) … say how much they believe their marriage is strengthened by the example of other committed couples embracing the same values they do," she said. "I like to think this is a whole new chapter for the institution of marriage to be stronger."
Posted by SUSAN RUSSELL at 4:55 PM

The Supreme Court said that both opposite sex and same sex marriages are legal. In administering the Sacrament of Marriage, the Church in California should adopt the same position. There is no need for two ceremonies. Use the 1979 BCP for both opposite and same sex marriages with changes in nouns and pronouns as needed. Of course, every marriage should include a Nuptial Mass, to remind us we are, "one bread, one body" and that the Real Presence of Jesus is there for us in the same way, no matter what our orientation may be.

Surely, our Bishops can at least agree to say publicly - all of them - that the CA Constitution should not be amended to embrace discrimination.

I think the Bishop has the right idea. There are countries in Europe that require a civil ceremony in order to the state to recognize the marriage. If anybody has ever seen "I Was a Male War Bride" starring Cary Grant, then you're familiar with the concept.

I'm am of the belief that a priest should not be able to sign off on what is essentially a civil contract.