Bumped by a U-Haul 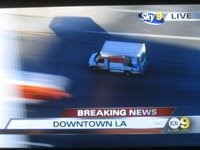 So the Breaking News on Jane Velez-Mitchell's Headline News show today turned out NOT to be what a "panel of experts" thought about Ted Haggard's fall from grace -- it was an obviously-high-on-something blond-in-a-tank-top who stole a U-Haul and led police on a high speed chase across most of Southern California this afternoon.

(As I said to the nice CNN man in the suit who walked me out to the car waiting to bring me back my office, "If this is the Big News that must mean we've fixed Iraq and the economy, right?" He said, "I don't think so, Ma'am.")

ANYWAY ... if you bothered to watch you know we each got about four words in. (If you DIDN'T bother you didn't miss anything!)

Just for the record, though, since I had them all ready, here are some of the pithy comments I had HOPED to make in response to Jane Velez-Mitchell's question, "So what do we make of the Ted Haggard mess?"

I had hoped to say that this whole tragic story is yet another illustration of what happens when someone thinks they have to be or become someone they're not in order to be accepted, to be loved, to be whole.

I also wanted to say (and at least had a chance to START to say) that the other minister on the panel (whose name eludes me at the moment) who went to such pains to declare that being homosexual was "no worse a sin than being an adulterer" was Exhibit A of the presenting problem in Ted Haggard's life -- and that problem wasn't his sexual orientation but his theological orientation.

It was buying the lie that "the church" has for too long told LGBT people -- the lie that they needed to live a lie in order to be loved by God -- the lie that Ed Bacon debunked on Oprah a couple of weeks ago when he said "Being gay is a gift from God" -- the lie that it is time for us to put behind us and get on with building up a kingdom that includes ALL God's beloved children equally at the table.

(And this was my favorite:)

Let's end the collateral damage to those like Ted Haggard who grow up thinking they have to choose between who they are and how they love and whether or not they can love & serve God.

Let's give young LGBT folks OUT role models so no matter what their sexual orientation ends up being, there is someone they can look to and say, "I want to grow up like him/her."

Let's model that it is no longer acceptable to preach family values and devalue gay and lesbian families.

(Even WITHOUT the U-Haul I wouldn't have gotten all that in during a Headline News segment ... but I'll be ready for 'em next time!)
.
Posted by SUSAN RUSSELL at 5:38 PM

I had hoped to say that this whole tragic story is yet another illustration of what happens when someone thinks they have to be or become someone they're not in order to be accepted, to be loved, to be whole.

Oddly, I've been saying the same thing with respect to the bitchy queens who have attacked Mike Jones and now Grant Haas for speaking out.

"Post homophobic religion". . . You TOTALLY Rock as the Queen of Soundbite. No one will be able to wear your tiara, darling.

I love the post-homophobic religion statement. One day, I'm sure, you'll get to use it. This summer, perhaps?

...what happened to the U-Haul?

This is why we watch MSNBC instead!

Okay, but what if being a bi-sexual man who also happens to find "staying faithful" difficult (not that there's any necessary relationship between the two - there's not), what if that IS Haggard's stable sexual orientation? Since orientation occurs along a continuum, and not along, say, discrete settings, who can say this isn't the way God made him? In other words, maybe Haggards behavior is as natural and God-given as my behavior is for me and your behavior is for you. If that's the case, does faithfulness need to be redefined on a person-by-person basis?