As reported in today's USA Today ... 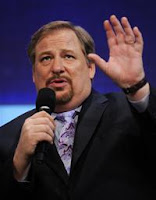 Rick Warren, who has been out of the news for, oh, about 10 minutes, since the controversial California pastor was picked to give the invocation at Barack Obama's inauguration, is back.

Recapping here: After sticking a fork in the eye of gay rights advocates by actively supporting Proposition 8 -- which overturned the legalization of gay marriage in California -- Warren compounded their outrage by equating gay marriage with incest in an interview with Beliefnet.

The hubbub lulled down a little over the holidays but today, he's back, with an open invitation to any group displaced by their denomination. This is code for Episcopal congregations that oppose that church's acceptance of a gay bishop in 2003. Earlier this week, a California judge ruled that a breakaway congregation, St. James in Newport Beach, cannot keep its property now that they have left the Episcopal Church.

The Southern Baptist Warren shared his letter with Christianity Today which says, in part:

We stand in solidarity with them, and with all orthodox, evangelical Anglicans. I offer the campus of Saddleback Church to any Anglican congregation who need a place to meet, or if you want to plant a new congregation in south Orange County.

This is pretty much guaranteed to revive demands by gay rights advocates for Obama to reconsider Warren for the invocation. My bet is that Obama will hold firm, maintaining, as he has before, that this is a diverse nation and that Warren, as much as Rev. Joseph Lowery, a zealot for civil rights, are equally welcome on the podium. Lowery is set to give the benediction.
.
Posted by SUSAN RUSSELL at 7:52 PM

The man is doing us a service by offering his campus to the schismatics. If they meet there, they have no need to continue to occupy what is ours. We need our buildings back to continue ministry. If Rick Warren provides a place for the occupiers, more power to him. They deserve each other!

Bravo to Pastor Warren for giving voice to his beliefs and for not bowing to those who would seek to punish him for those beliefs!

Yes, Eliane ... just what we need more of: Clergy who use the Bible as a weapon against those with whom they disagree; who condone violence against foreign heads of state and discrimination against gay and lesbian Americans; who dismiss scientific inquiry in favor of Biblical mythology and who encourage schism rather than dialogue.

Just what America needs more of.

Thanks for taking time to comment. Have a great day!

Rick Warren is the kind of preacher who led me out of the Baptist church.

He currently has a following. He is where the money is......conservative, fundamentalist Christianity. Many preachers have made fortunes there and then fell; Jim Bakker, Jimmy Swaggart, etc. Eventually, his time in the spotlight will go away.

He reminds me of a used car salesman.

Rick Warren's "A Purpose Driven Life" played a huge, critically important role in my return to Christ. I intend to reread his book and retrace that path during this Lenten season. God Bless Rev. Rick Warren.

What A Mighty God We Serve ... one who can even use clay vessels like Rick Warren to preach good news and soothe the sin-sick soul.

There are excellent aspects to "The Purpose Driven Life." Homophobia and sexism are not among them.