"I meant exactly what I said." 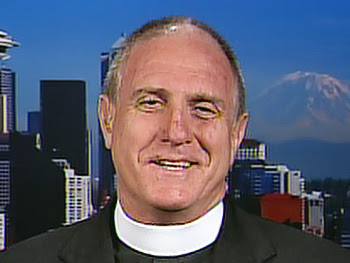 Another hot-button issue that sent viewers straight to our message boards was a comment made by the Rev. Ed Bacon during a discussion on spirituality.

After hearing from Sedrick, who says he had a tough adolescence growing up as a gay teen in rural Alabama, the Rev. Bacon said something Oprah says she has never heard a minister say. "Being gay is a gift from God," the Rev. Bacon said. "But our culture doesn't understand that. And consequently, the culture sends messages that you ought to isolate. And isolation is the antithesis of what all of us need."

To further explain his comment, the Rev. Bacon joins Oprah via satellite. "I meant exactly what I said," he says. "It is so important for every human being to understand that he or she is a gift from God."

Just as the Oprah.com message boards were buzzing, the Rev. Bacon says he has been receiving plenty of feedback. The majority of it, he says, is positive. "My e-mail was full of comments, and what I gather is that it simply unleashed a flood of healing throughout the country and Australia and Great Britain, across the continent. It was amazing."

Stay tuned for further news on this ... and do consider logging in to register for the webcast Wednesday night when I guess the panelists from last week's show -- including Ed -- will take questions.

What an interesting beginning to the New Year, eh? Who REALLY thought they'd live long enough to see Ed Bacon on Oprah AND Gene Robinson giving the opening prayer at the opening event at the Lincoln Memorial for the Inauguration Celebration of a 44th President of these United States named Barack Hussein Obama?

If anyone needed to be doing any clarifying, it should have been Oprah. Her reaction spoke volumes.

Out of all the intricate combinations of people, we are all unique. Like a snowflake. No one quite like us has ever been here. No one will ever come after us that is quite like us.

God uses us, AS WE ARE, to do miraculous things, and loves us all equally.

So why in the world is this soooooo hard for people to accept? It just makes me want to stand out on the street and yell, "Well DUH!"

Well that little 5 minute segment didn't tell me anything I had not heard from Rev. Bacon in his sermon. I thought she would have delved into this a bit deeper, but she didn't.

She seemed leery once again when she introduced the segment. Maybe she has been enlightened by this and maybe it will lead to further dialogue on later shows. But Kudos to Rev. Bacon in standing his ground and speaking from the heart.

It all depends on the direction you read your bible and what commandments you hold close to your heart. Love of God and Love of Neighbor are the keystones. Only if the rest of Christianity held to those 2 commandments like some aspire to do.

Yay! It wasn't a missed opportunity after all. Better yet, TWO days of Oprah's vast audience getting a dose of the real message of Christ via Ed Bacon. Hip-hip-hooray!

Thanksgiving for Rev. Bacon and his speaking so openly for the LGBT community. He, too, is a gift from God.

Now THAT makes me feel optimistic. I'm glad I clicked over here tonight.

You know, there is a certain characteristic shared by some of these priests in the Dio LA: Jon Bruno, ex police officer and football player. Ed Bacon looks like he was cut from the same sturdy cloth. Yessir! Talk about Muscular Christians...!