Inaugural is a "coming out party" for Democrats 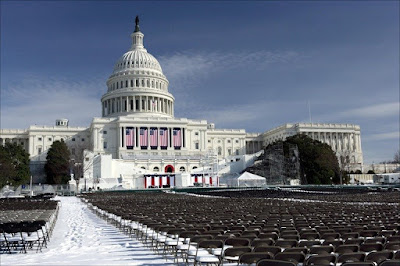 ... from the Associated Press article that includes the line up for clergy at the National Day of Prayer service on January 21st ... a list that includes Muslim, Jewish and Roman Catholic voices.

"This inaugural is a coming-out party for the Democrats in terms of their religious voice," said Stephen Prothero, a religion professor at Boston University. "Democrats found their religious voice in the last election and I think there's interest in seeing how that voice is going to sound."

Haynes said Obama is also carrying the hopes of the many Americans frustrated by the prominence of the Christian right in recent decades, especially in the administration of President George W. Bush. That partly explains the backlash against Warren, he said.

"The sense is it's time to balance that out and to have other voices heard. He's supposed to represent change," Haynes said. "There are many people looking for a symbolic change in tone, especially when it comes to issues of religion and public life."
Posted by SUSAN RUSSELL at 11:51 AM

Inaugurations have been so much more impressive visually since they moved the ceremony from the East Front of the Capitol to the West Front in 1980.

It is frustrating that many banks and loan institutions have been digging deep (up to $300,000) each to support the "private" Inauguration events.

Much of that money comes from the recent $700 billion dollars of our money that we gave to bail them out.

While it is an exciting day, with nearly 10 percent of our population out of work, many people losing their homes, this extravagant expense seems oddly out of place for a candidate who says he is for the little guy.

Just a thought. I am wishing the very best for President Obama and our country. Butting partying and celebrating like it's 1999 is not an appropriate way to feel at one with those so in need right now.

There will also be a Hindu giving a prayer. Assuming everyone shows up it will be the first time a Muslim or a Hindu has given a prayer (Bush did invite a Muslim but he was ill the day of the service and couldn't make it).