Shout out to Al Sharpton! 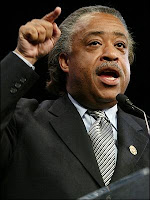 Sharpton decries churches pushing Prop. 8
Atlanta alliance forms to counter anti-gay religious rhetoric
“It amazes me when I looked at California and saw churches that had nothing to say about police brutality, nothing to say when a young black boy was shot while he was wearing police handcuffs, nothing to say when the they overturned affirmative action, nothing to say when people were being delegated into poverty, yet they were organizing and mobilizing to stop consenting adults from choosing their life partners,” Sharpton told a packed audience on Jan. 11.

“There is something immoral and sick about using all of that power to not end brutality and poverty, but to break into people’s bedrooms and claim that God sent you,” Sharpton added.
.
Posted by SUSAN RUSSELL at 9:40 AM

Profound statement. Why are so many of our Churches so quiet as we get malled? Thanks you Rev Sharpton.

No foolin' IT, Rev. Al has ALWAYS been kewl that way. 15 years (and 150 pounds?) ago, Al was saying "I'd be flattered if ANYBODY found me attractive!" (this, in response to the hypothetical Bete Noir, of a gay man making a pass at him).

Rev. Al wants JUSTICE for those born poor, black (or esp., BOTH). He's looking for allies, and doesn't care who they sleep with! ;-)

Chalk one up to Rev. Al!

Wow! That's awesome!! From Al Sharpton, too. How very interesting.

Not surprising - after all he defended the right of a gay man to be a shopping mall santa claus. Okay it was on Boston Legal but any guy who hangs out with Denny Crane is alright by me :-)

It's about time the African American population recognized the prejudice againt glbt folks...