It was just another Sunday in paradise ... here's a shot of the crowd on the lawn after the 11:15 service at one of those declining liberal mainline churches ... AKA All Saints Church, Pasadena. 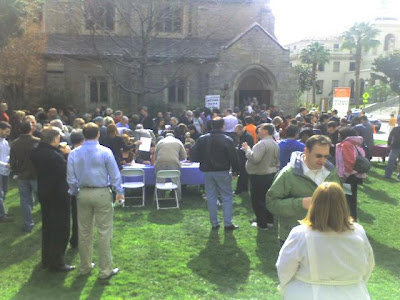 Every Sunday we're given a chance to "put our faith into action" and this morning the "action" was one my mother would TOTALLY have approved of: writing thank you notes! (Or, more accurately, signing and personalizing thank you letters to President Obama for the actions he's taken in these first days of his historic presidency. 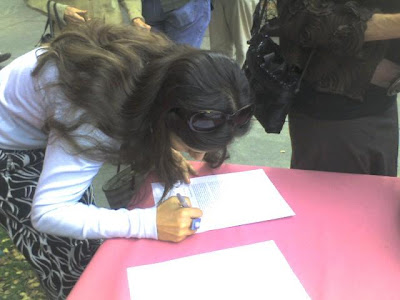 As you can see ... it was bumper-crop-business at the action tables ... 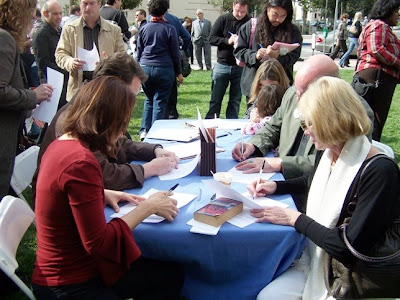 ... and not everybody even waited for a table to get their letter done! 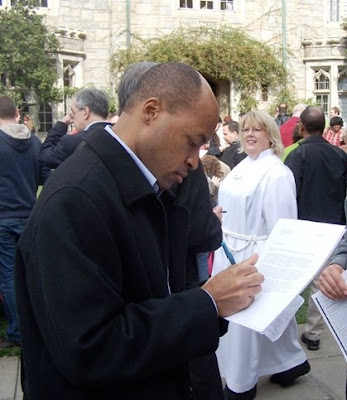 The result was over 1200 signed letters -- which will be wending their way to Washington next week. 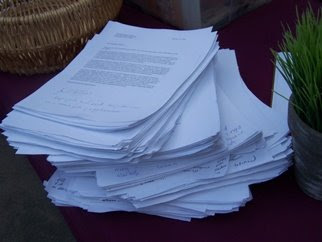 Thank you for your courageous, principled and inspiring leadership in the initial days of your presidency.

The actions of your first week have immediately increased my hope for peace and justice and are inspiring a new generation of Americans to be people with an inner moral sense -- to be people of conscience. Your work has inspired me to respond by recommitting my my own energies and resources toward the good of all. Thank you for inviting each of us into the work of restoring our country's moral leadership in the world, calling us to confront the moral issues of our day, which includes respecting the dignity for everyone in our human family.

Your appointment of Senator George Mitchell as special envoy for Middle East Peace brings the United States to a new level of commitment to peacemaking in an area of the world so oppressed by an increasing cycle of violence, which will never solve anything. Appointing a dedicated and experienced peacemaker who commands global respect restores our integrity in the international community, demonstrating that we recognize that Unites States' involvement is indispensable in achieving the goal of establishing a lasing peace between Israelis and Palestinians.

As a person of faith, I am deeply grateful to you for bringing an end to our country's morally grotesque and counter productive practices of torture. What a moving and healing us of your moral authority! I feel the same about your lifting the the shame of Guantanamo from our country's future reputation in the world. Your Executive Order banning torture and closing Guantanamo move the heart, stir the conscience and take enormous strides forward in our collective responsibility to ensure dignity and justice to every member of the human family. You have my passionate commitment to stand with all your efforts to prevent human rights violations both at home and abroad and to restore human rights standards everywhere.

With great respect and appreciation,
[Your Name Here!]
.
Posted by SUSAN RUSSELL at 5:42 PM

Oh, no, Susan, I agree totally with the points of the letter! George Mitchell seems to be able to make peace where peace isn't possible. And, of course, torture is never right and the Gitmo prison is a stain on the nation and should be closed as soon as possible.

As to the "moral authority" of someone who thinks babies are a punishment - not so much.

That said, at my parish this weekend we all filled out postcards urging our Congressman and Senators to oppose FOCA. Probably around 2000 to each, to be added to those from other parishes and delivered by the Bishop.