So much for the "what about the children" argument 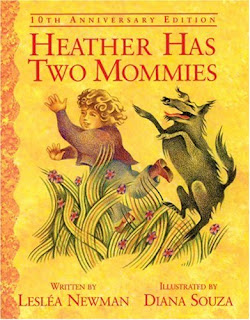 Lesbians make better parents than conventional couples, according to a director of the government’s parenting academy.

Stephen Scott, director of research at the National Academy for Parenting Practitioners, told a meeting last week that the latest research showed that children of such couples did better in life.

His arguments are supported by experts who have found, over years of research, that children brought up by female couples are more aspirational and more confident in championing social justice. Such strong endorsement from the government’s main agency for parenting will give a boost to gay parents.

Read the rest here. And if you don't believe "the experts" maybe Mary Cheney will work for you (from the conclusion of the Times feature):

Mary Cheney, the lesbian daughter of Dick Cheney, the former American vice-president, who is expecting her second baby later this month, said in a recent interview: “Every piece of remotely responsible research that has been done in the last 20 years has shown there is no difference between children raised by same-sex parents and children raised by opposite-sex parents. What matters is being raised in a stable, loving environment.”
.
Posted by SUSAN RUSSELL at 3:13 PM

Your not doing science. Science is never PROVEN.

My Biopsychology professor here at Middle Tennessee State Univeristy would disagree. He thinks that it is important to have a dominant male presence when you raise a young male. But of course he is an evoluntionary psychologist..

I have encountred this idea of child rearing by LGBT parents before. I would say pragmatically, that I personally would not like to be the child of a LGBT parent, this is NOT because I am against same-sex marriage, but because LGBT parents are a stigmatized minority.

HOW CAN YOU be a good parent when you don't have basic civil rights are a stigmatized group of people???

OK Kit your right. I misspoke.

What I am trying to say is this:

Children of GLBT parents will face discrimination. So being a child of a LGBT parent will give you special challenges that other children might not have to faced.

I had special challenges growing up as well. My father died of cancer when I was young and my mother because an alcoholic. We were poor. Because of these things I almost did not get an education. So, I like other minority groups have faced challenges.

I would have prefered to be a child of a White, Straight, Protestant, Upper-middle class family, with political connections. If I were I might be at Harvard today instead of Middle Tennessee State University.

Another concern for these children / adults (DCPs) is the question of the identity of the sperm donor and whether that will be provided to them.

ASRM gives lip service to disclosure but doesn't really pay attention to what DCPs have to say about their experience. There are many more questions involved than the research referred to gets at. The area is contentious. The point is to actually find out what DCP say.

ARTs are contentious because there is big money involved on the side of the commissioning parents and the medical and pharmaceutical industries. In the USA about 5 Billion / year.

The direction of things here is towards the emerging voice of the DCP. Their concerns are not getting air.

I used to feel the same way, Mitchell.
You get over it.

I'm glad to have been poor and had - and have - my "challenges."

I am repulsed by these arguments from the faintly masked MItchell--who sounds like a troll underneath, don't you think?

Indeed, the American Academy of Pediatrics as well as numerous other health related organization sees no threat in gay relationships. they see a threat in the ABSENCE of marriage protections, as does the AMA and many others. The problem, to put it simply, is not who the parents are.

Numerous studies show children of gay parents are well-adjusted and if anything, more balanced than children of straight parents.

Indeed, our kids have had no problems having gay parents. If anything it has been a measure for them of the quality of their friends. "If they have a problem with you", says Step Daughter, "they aren't the kind of people I like.". Not many fail this test. Our kids are very happy adjusted (and of course, very straight, as are most kids).

BBBBEEEEEEPPPPP! You lose, Mitchell. As does your professor.

And may I just point out, in the pure sciences at least (my own field), economic background does not restrict access to graduate education. Top universities take students from everywhere and all backgrounds. If you are an undergraduate at Middle Tennessee, you can go anywhere, with a full graduate fellowship and no debt. The only limit is what's in your brain, not your wallet.

Of course, non-science fields are different, but in pure science, it's pretty darn meritocratic.