The Archbishop of Canterbury, Dr Rowan Williams today launched the official programme for Lambeth Conference 2008 Equipping Bishops for Mission at Lambeth Palace. Joining Dr Williams on the panel were Archbishop Ellison Pogo (Archbishop of Melanesia and Chairman of the Design Group) and Archbishop Ian Ernest (Archbishop of the Province of the Indian Ocean). Mrs Jane Williams outlined the plans for the Spouses’ Conference which is being held alongside the bishops’ conference. Jane Williams was joined by Margaret Sentamu. 30 bishops from 17 provinces around the Anglican Communion also joined the press conference.

The full statement is here. 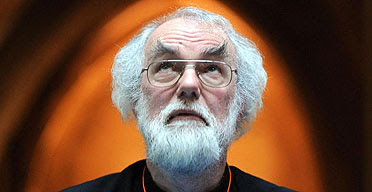 Finally, my award for best headline goes to Ruth Gledhill's blog, entitled: The Importance of Archbishop Ernest. Why?

[from Gledhill's blog] In October, Archbishop Ian Ernest, Primate of the Indian Ocean, was along with other leading Global South primates co-signatory to a document in which they called for Lambeth to be postponed and said that 'what is at stake in this crisis is the very nature of Anglicanism.' Today he sat next to the Archbishop of Canterbury at the press conference at Lambeth Palace to launch the 2008 Lambeth Conference. ... His is not the only view to suggest possible fracturing in the conservative ranks.

So what does it all mean?

1 - In July the every-ten-year gathering of Anglican bishops will happen. In spite of the best efforts of the schismatics to keep it from happening, bishops from around the communion will spend weeks together in prayer and study and worship -- seeking unity in the Christ who binds us altogether as diverse members of His Body in the world.

2 - We will be there ... to witness to the Good News of God in Christ Jesus working in and through the lives of vocations of the LGBT faithful.

3 - There will be Life After Lambeth Conference. In August, we will not be celebrating the Kingdom Come nor will we be grieving the End of the World. The bishops will meet, pray, cogitate, negotiate and then we'll all fly back home and work on being the church in the world. And in this part of the world, that church looks like a community of faith inching ever-closer to the full inclusion of all the baptized into the Body of Christ.

Posted by SUSAN RUSSELL at 2:31 PM

On the prospect of Bishop Gene Robinson attending, Dr Williams said: 'Gene Robinson has not been invited to the Lambeth Conference. It is proving extremely difficult to see under what heading he might be invited to be around.'

Maybe someone can counsel ++Rowan by suggesting he emulate the Christ-like behavior of inclusiveness -- that is the perfect heading. Of course, along with that, we should pray daily the Holy Spirit grant him courage to lead the Communion.

He has stubornly refused to lead or follow. I'd rather he got out of the way. But first he could at least get to a decent barber. If his outsides were less dishevled perhaps his insides would follow suit.

He has been in a position to educate and lead members of the Anglican Communion out of bigotry and intollerance and he has done the opposite. He is complicit with it. He has empowered false witness, mischaracterization, bad theology, and viscious heartlessness in others. He could have been a force for illumination and awakening to the dignity and inclusion of all God's children in God's house. I am certain that one only does this if it is one's own state of heart.

We only have 364 more days of George Bush. When that timer goes off I'll set one for Rowan Williams. How will history books remember him when his life is reduced to a mere paragraph on Religious upheaval in the early 21st century? As part of the religious persecution of gay folk?

What a waste and insult to his position.

Has anyone noticed that he is looking more and more like "Dumbledore" every day?

Libearsings said: "We only have 364 more days of George Bush."

What does this have to do with the beginning og the Labeth Conferance being launched?