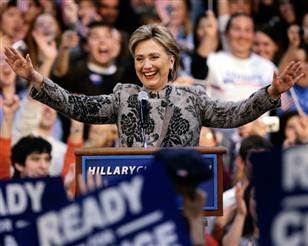 Clinton Stuns Obama
[New York Times] MANCHESTER, N.H. — Senator Hillary Rodham Clinton of New York rode a wave of female support to victory over Senator Barack Obama in the New Hampshire primary on Tuesday night. In the Republican primary, meanwhile, Senator John McCain of Arizona revived his presidential bid with a Lazarus-like win.
Both candidates called their victories comebacks, because both followed their defeats in the Iowa caucuses, where Mrs. Clinton placed third and Mr. McCain fourth.
Mrs. Clinton’s victory came after her advisers had lowered expectations with talk of missteps in strategy and concern about Mr. Obama’s momentum coming out of the Iowa caucuses.
Mrs. Clinton told supporters, “I want especially to thank New Hampshire. Over the last week I listened to you and in the process I found my own voice.”
She added, “Together, let’s give America the kind of comeback New Hampshire has just given me.’
Mr. Obama conceded the race to Mrs. Clinton, congratulating her on a “hard-fought victory.”
Read the rest here ...
====

And how THRILLED am I to have lived long enough to see two such extraordinarily gifted candidates running neck-and-neck for the highest office in the land!! It's going to make for a VERY interesting primary here in California ... for a change!

Posted by SUSAN RUSSELL at 8:39 PM

How does the Democratic party in California apportion it's delegates? Winner-take-all, or in proportion to the vote?