Update: Who Knew???? Lemmings evidently actually do NOT jump off cliffs! Got this email "heads up" from the Director of the Oxford Centre for Animal Ethics:
.

"... your last post reinforces an untruth about lemmings. They do not commit mass suicide - the Disney pictures of lemmings falling off a cliff fails to mention that they were pushed, see, for example this Wikipedia article. I know you battle against unthinking prejudice and persecution, which is why I hope you won't mind my little nudge! Truth requires a small correction."

So there you have it. Truth evidently does require a small correction. And, committed as I am to battling unthinking prejudice and persecution, the truth seems to be that the lemmings who DON'T jump off cliffs are actually smarter than ... 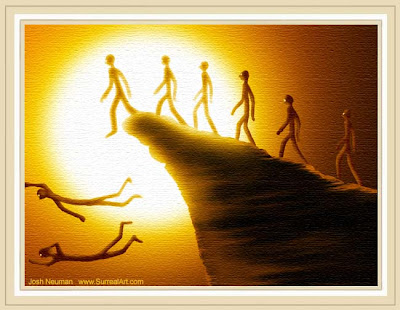 ... the would-be Southern Coneheads who do!

Posted by SUSAN RUSSELL at 8:01 PM