Fun facts to know and tell about the Governor of Alaska ...

Say what about the bridge to where????
. 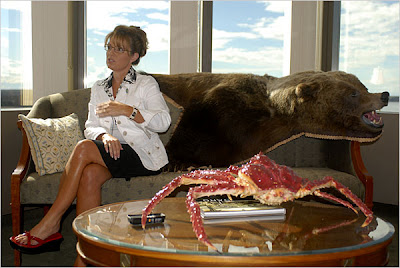 Alaska Gov. Sarah Palin's assertion that she rejected Congressional funds for the so-called "bridge to nowhere" has upset many Alaskans. During her first speech after being named as McCain's surprise pick as a running mate, Palin said she had told Congress "'thanks but no thanks' on that bridge to nowhere."

When she was running for governor in 2006, Palin said she was insulted by the term "bridge to nowhere," according to Ketchikan Mayor Bob Weinstein, a Democrat, and Mike Elerding, a Republican who was Palin's campaign coordinator in the southeast Alaska city.
.
"People are learning that she pandered to us by saying, I'm for this' ... and then when she found it was politically advantageous for her nationally, abruptly she starts using the very term that she said was insulting," Weinstein said.

Last year, Palin announced she was stopping state work on the controversial project, earning her admirers from earmark critics and budget hawks from around the nation. The move also thrust her into the spotlight as a reform-minded newcomer.
.
The state, however, never gave back any of the money that was originally earmarked for the Gravina Island bridge, said Weinstein and Elerding.
.
In fact, the Palin administration has spent "tens of millions of dollars" in federal funds to start building a road on Gravina Island that is supposed to link up to the yet-to-be-built bridge, Weinstein said. "She said 'thanks but no thanks,' but then kept the money," said Elerding.

Given that she's from the opposite party and that she's been quite busy blowing up the old boy network, you might want to check the facts before publishing Mayor Weinstein's assertions. For one thing, just because the bridge isn't being built doesn't mean that the island doesn't need a new road.

Actually, I was more interested in Elerding than I was in Weinstein.

It is my belief that when one side, or the other, attacks the credentials, beliefs and experience of the other they are sending a message that they don't believe they can win the argument on the merits.
When McCain runs ads denigrating or running down Barack Obama he runs the risk of asking people to vote for the lesser of two evils.
The same is true when Democrats attack Republicans.
Tell me why I should vote FOR you, don't bother telling me why I should NOT vote for the other guy.
If we can't win on the merits of our own arguments then we shouldn't win.
The politics of personal destruction, so apparent during the past two decades is going to ruin this country.
My humble opinion anyway. I know I'm tilting at windmills but I'll be glad, if, and when we depart from the politics of personal destruction.

Interesting how the Right Wing always confuses "attacks" with "facts".

And talking of the Right Wing, say Sen. Obama's daughter were 17 and had turned up 5 months pregnant. How many tears do you think they'd be shedding for her?

I am NOT a right winger. I am a solid opponent of the war and George W. what I'm concerned about is that the Democrats are focusing on the wrong thing if they want to win this election.
After all, in Barack's own book he describes what he was doing when he was 17 years old. In case you haven't read his book, and I commend it to you because it is a very compelling story, he was doing cocaine and marijuana at 17 and coasting through high school.
If we're going to call the accidental pregnancy of a 17-year-old girl a scandal, then a whole lot of people are going through "scandal." The word scandal should be reserved for something that actually is a scandal.
If we're going to get into the morality issues, then the other side can certainly bring up Bill's dalliance in the Oval Office, Ted Kennedy's long history of booze and women. All that stuff distracts from the real issues of the day.
My only point (and I'll again point out that it cuts both ways) is that issues, not personalities should prevail. The win at all costs may work (see Kerry) but it does not ensure good leadership.
So I'll say it again using the pregnancy of a 17-year-old daughter of a candidate as an "issue" is unseemly especially when there are real issues out there.
I also wonder if there would have been the same reaction if it had been the governor's 17-year-old son who had gotten someone pregnant? Or would it have been "boys will be boys."
The same people who complained about the sexism of the media and the process when it involved Hillary Clinton are now the same who are piling on Gov. Palin for exactly the same reason.
I actually heard a Democratic pundit say that Americans might not like that a mother would have to leave behind a special needs child to do the business of the country.
Sexist? You bet.
As far as Obama's children, they like Chelsea Clinton, Amy Carter and others should and ought to be off limits. Heck, Obama said it himself.
I recognize that the original blog post was about a bridge and THAT is a legitimate issue to investigate and discuss.

Which is why the post was ABOUT "the bridge" issue. I think it goes a long way to illustrate how little we know about this candidate and how much we NEED to know.

The question is not what kind of mother Sarah Palin is ... the question is what kind of VP will she be. And if you want a ticket led by a man who voted with Bush 95% of the time and thinks it would be swell to be in Iraq for another 100 years with a woman VP who is anti-choice, pro-gun and a Creationist, then McCain/Palin is for you.

If you want to see a new direction in Washington focused on hope rather than fear,

on building bridges rather than blowing them up,

on economic policies that give all Americans the chance to achieve the American Dream rather than continue to pander to the oil industry and give tax breaks to the richest among us,

on a commitment to liberty and justice for ALL ... not just some ...

then Obama/Biden is your cup of tea.

I actually heard a Democratic pundit say that Americans might not like that a mother would have to leave behind a special needs child to do the business of the country.

When I heard Democrats question whether a woman with 5 kids could handle being VP and the Republicans defending her, I looked out the window to see if there were any pigs flying by.