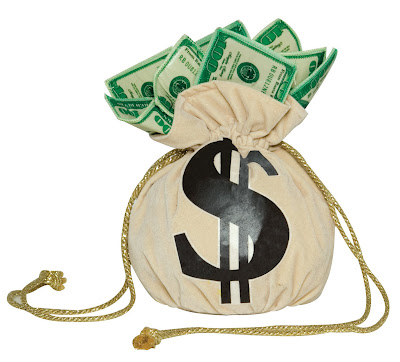 SEVEN HUNDRED BILLION
.
DOLLARS
The Forbes.com article Bad News For The Bailout included this data point about the data points used to arrive at the proposed cost of the bail out. It turns out:

"It's not based on any particular data point," a Treasury spokeswoman told Forbes.com Tuesday. "We just wanted to choose a really large number."

Okay. I'm not an expert on either, but it seems to me that the unnamed Treasury spokeswoman's answer is to economics what being able to see Russia from your house is to foreign policy. (AKA: NOT ENOUGH!!!)
.
I mean, I totally "get" that we have to do something to fix this mess -- and the fact that the House couldn't pass the agreement as submitted to them threw the market even more into the toilet -- but come on here ... this isn't exactly the kind of response that inspires confidence that we're on the right track is it?

I'm thinking about petitioning the Episcopal Church to suspend the Lectionary Cycle and let us keep September 21st's Collect of the Day for at LEAST the rest of this election cycle:

Grant us, Lord, not to be anxious about earthly things, but to love things heavenly; and even now, while we are placed among things that are passing away, to hold fast to those that shall endure; through Jesus Christ our Lord, who lives and reigns with you and the Holy Spirit, one God, for ever and ever. Amen.

Posted by SUSAN RUSSELL at 6:09 PM

Our economy in Mexico is very different than your own, but this kind of insanity eventually effects all of us, the entire world.

About that prayer...You hit the nail on the head, Sister!

September 21st's Collect of the Day is like a prayer shawl gently draped on the shoulders . . . aaahh. Thank you.

Thank you for this!
Whenever Washington cries it must fix something in a week, it is wise to rise up and say, "no."

The American people, in their wisdom, have risen up and given a "I'm mad as hell and not taking this anymore," to Congress. Good for us.

When Nancy Pelosi, Harry Reid, George Bush and Henry Paulson are suddenly trying to ram $700 billion down our throats to help fat cats, look out.

That's more money than we have spent in Iraq to date. The sky will not fall, the economy will, but things will level out and the fat cats will have to bail themselves out. Maybe they can start with their hefty bonus and pay packages.

Rather than cooperate in what is pragmatically necessary to fix what Barack Obama calls, "this mess", all sides in the debate continue to point fingers at each other, and argue for or againt "principles". Principles, however, do not pay bills. There is also an assumption that propping up the existing system is the recipe to prevent "disaster". However, it's the present system that got us into trouble. My answer is rather than give $700 Billion to the bankers, use the money to create jobs rebuilding our railroads and highways, and creating a new information age infrastructure that would bring broadband to every home and promote universal computer literacy. Other job creating measures could include Universal Bilingual Education (Englich & Spanish for everyone)and last but not least, Universal Health Care. When people are WORKING, they spend, and create more jobs, and they have the means to buy housing, food, and the other necessities of life. The reign of God must replace the reign of Wall Street. The bailout plan is appalling: if a company get $100 Million in aid, it can't pay a departing executive a Golden Parachute, but if takes $99 Million it can. And there are no effective limits on executive pay. I fail to see why anyone needs $500,000 to live. I live on far, far less than that, and live very well. I don't understand why those folks can't just live like the rest of us and share their surplus with those who really need it.

I think a collect on behalf of Barak Obama might be more helpful.

I don't know whether this is/was the correct response altho I am inclined to trust the most intelligent person in Congress, Barney Frank.

The genesis of the $$ number doesn't surprize me. I sat in on a presentation to Ford Motor company by an actuary on what the required funding for their long term disability insurance should be. He demonstrated amazing mathematical expertise in deriving various factor to be applied to their resultant liability. And then a (blessed) client asked: "This original number that you started with. Where did it come from?"

And with geeky honesty he said: "Oh, I made that up"

Ask this question as well - where's the money coming from?

$700B worth of more taxes are not going to be raised this week. So it'll have to be borrowed. Sure, a bunch of it will be paid back, eventually, with interest, as the assets are disposed of. But it'll still have to be borrowed and you and I will be in debt to someone. Who's got this kind of money? The Chinese? The Middle Eastern oil states? After all, that's where our money's been going to buy oil and manufactured goods. And they'll get it back with interest. Another transfer of wealth, and this time for no productive reason.

Giving $700B to the same people whose actions led to this problem in the first place (and no party's hands are clean in this matter, neither the Democrats nor the Republicans) doesn't strike me as a particulary good idea.

As P. J. O'Rourke says, "Giving money and power to government is like giving whiskey and car keys to teenage boys."

In 2005 Rep. Barney Frank sat in hearings over a bill (that, as it happens, was co-sponsored by Sen. McCain in the Senate) that was intended to increase oversight into Fannie Mae in reaction to a Federal Government report that stated that Fannie Mae was overstating the value of it's assets (mortagages) in order to enable it's executives to qualify for their bonuses. Here's the New York Times quoting Barney Frank:

"''These two entities -- Fannie Mae and Freddie Mac -- are not facing any kind of financial crisis,'' said Representative Barney Frank of Massachusetts, the ranking Democrat on the Financial Services Committee. ''The more people exaggerate these problems, the more pressure there is on these companies, the less we will see in terms of affordable housing.''"

davidjustinlynch, why should you and I be required by the government to pay for teaching everyone in the country Spanish?

I could possibly see providing programs to teach non-English speakers English - but then such programs exist now, and in any case people have been able for years to learn English (such as my wife's Polish relatives) for years without any such funding.

I'll tell you what, all you people go out and check the real worth of your investments. Today. Then tell me you think we should just let Wall Street collapse on itself.