McBush "Comes Out" as Dictator Wannabe 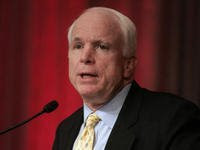 So I was driving into work a little later than usual this morning ... had to wait for Mr. Ben to come and help us figure out why our sprinklers are watering the car in the driveway rather than than the flowers in the garden.

ANYWAY, I'm half-listening to the radio, thinking about traffic and to-do lists and what I want to do about lunch today and I hear the tail end of an interview with John McCain on the economic bailout that makes me say, out loud, in my empty-but-for-me car, "WHAT????"

So I get to work ... do the things I have to do and then decide rather than going out to find some lunch, I'll eat what's already here in my office and try and figure out if what I heard coming in was accurate or not. So I Google "McCain" and "Dictator" and ... sure enough ... my hearing is still good.


... but if you don't have 2:16 minutes, here's the quote that grabbed my attention in the radio this morning:

MCCAIN: I just want to make a comment about the obvious issue and that is the failure of Congress to act yesterday. Its just not acceptable. […] I’m not saying this is the perfect answer. If I were dictator, which I always aspire to be, I would write it a little bit differently.

Yesterday. He said this YESTERDAY. In the middle of the greatest economic challenge we've faced in generations when the country is crying out for an end to polarizing politics and a way to resurrect hope, energy and commitment to the American Dream, John George W. McBush-Cain thinks this is the kind of rhetoric that the nation needs?
.
We need someone who aspires to be a dictator in the White House as much as we need someone who can't remember what newspaper she reads as President of the Senate.
.
Lord have mercy. I'm going back to work now.
.
Posted by SUSAN RUSSELL at 11:50 AM

I think it's called satire. But since none of us want to cut any slack to those we oppose, I guess I'll play.

No one who really wanted to be a dictator, would certainly say that out loud. So I'm not putting a lot of stock in the answer.

Of course, maybe you were being satirical in your response.

No one is in the mood for humor right now, I guess. Even though the Washington clown act in D.C. on both sides is pretty funny.

A sinner saved by God's Grace.

No, Jim ... I wasn't being satirical. I was being dead serious.

Whatever McCain "meant" by the comment ... YESTERDAY ... whatever his intent (satirical or otherwise) ... my POINT is it is time to call bullshit on the rhetoric that even IMPLIES that one man gets to dictate his will to this nation. Period.

Then I guess I really am disturbed that Sen. Obama, an Ivy League educated man, believes there are 59 or 60 states in the union.

It is frighteningly ignorant that a candidate for the Presidency doesn't even know how many states there are.

If you need the You Tube on his statement that he had traveled to 57 states and only had two more to go (Alaska and Hawaii), I'll be glad to forward it again.

I'm willing to cut him some slack that maybe he didn't really mean that, but bull is bull, no matter what side says it.

Jim of Michigan (Go Blue, by the way)

And last weeek in a televised press conference I introduced Warner Traynham as a retired bishop instead of a retired rector.

I'm not sure why I'm bothering to keep this one going but here goes: It's apples and oranges. Obama misspoke. We all do that. If McCain had said "I've always wanted to be ice skater" when he meant "roller skater" it would be a "whatever."

My point ... which I'm making now for the last time because I have actual work to do ... is that watching this two minute clip of McCain AFTER he claimed credit for getting a bailout bill passed that ended up failing and in the face of the dramatic need we have for talking across divides and bridging differences in this country horrified me.

What we need to call bullshit on is the idea that one "side" doesn't need the other ... or that ANY of us need someone who aspires to be a dictator.

(And if it turns out he misspoke and meant ice skater then nevermind.)

I'm no fan of the new McCain, whose best days are clearly behind him.

I think his comment was inappropriate in the context. But trying to make this the marker of a sinister intent to overthrow democracy is a bit much, even for someone like me, for whom Obama is still far too right wing.

The propriety of McCain's comment does, however, speak to his judgement. If he thinks that an economic crisis is the place to make jokes about such things, he's sorely in need of a new think.