In the local paper 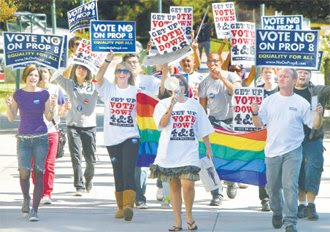 Proponents believe that if Proposition 8 fails, the state will impose its rules on religious marriage ceremonies.

Opponents believe that argument is false and note that the state allows divorced couples to remarry, but respects the right of the Catholic Church to prevent such second and third marriages.

Even among area churches, the debate over Proposition 8, is evenly split. Bill Ankerberg, Senior Pastor at Whittier Area Community Church, said he supports equal rights within domestic partnerships, but believes there needs to be a separate set of rules concerning divorce and child custody specific to gay couples due to the unique nature of the union, he said.

"To just call it marriage and treat it like marriage is laziness on the part of legislators," Ankerberg said. "To just support it is to be naive."

That's how Julie Tinney sees it. She was married Oct. 25 to her partner, Mirna Castaneda, in the couple's backyard in Alhambra. "We went to the courthouse and we filed legal papers to make this happen," Tinney said. "Marriage is a legal issue, that requires legal paperwork, that gives you civil rights."

The Star News also has a Prop 8 poll on its website right now. Don't know long it'll be up there but check it out here and if it's still up there, weigh in.

Posted by SUSAN RUSSELL at 4:14 PM