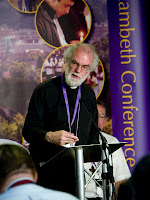 A parishioner left me a hard-copy of this reflection on things Anglican in my parish mailbox awhile back and I just got around to reading it today ... and to finding it online to post here.

If you're looking for a great, capsule version of where we are and what next after Lambeth, look no further. Jack Miles pretty much covers it in:

WHAT IS ROWAN WILLIAMS TRYING TO HOLD TOGETHER?
September 12, 2008 Commonweal Magazine

Do read it all ... maybe even print it out for future reference. But if you're in a hurry, here's his conclusion:

In short: politically conservative or moderate, socially liberal, and in that mix probably ahead of the curve. All surveys, after all, show that younger Americans are more tolerant of homosexuality than older Americans; few show any durable shift to the political left. Ten years from now, how many Episcopalians will want to exchange the security of local governance for the perils of remote governance by an Africa-dominated council-all to escape the peril of gay marriage and gay ordination?

By then, to be sure, the GAFCON Americans, with a bishop or two of their own, may be a self-governing church, but as such-without, so to call it, the African inflation-they will be almost negligibly small. Meanwhile, for their own children, a decade from now the dinner-table question may well be: “You guys set up a whole ’nother church over that?”

Fr. Webber writes perceptively of “the central question of Anglican life: Can a Christian community exist without a central authority and narrow definitions of doctrine? One proposed answer is an Anglican covenant, which some see as a hopeful way forward, but others reject it as changing the focus of Anglican life from communion to laws.”

My prediction is that ten years from now, the nays will have it. The Episcopal Church will be about the size it is now, governed about the way it is now. GAFCON will have faded, losing some of its members to the Catholic Church but more to a kind of inertial reconciliation with the Episcopal Church. Episcopalians will adapt benignly, if need be, to a looser relationship with Canterbury and the Lambeth Conference, which is unlikely to adopt a covenant at all comparable to one of the classic “confessions” of the Reformation.

As for Christian communion among the churches of this tradition, Lambeth is, after all, only one vehicle for it and, as the Church of Ireland has reminded us, an optional one at that.
Posted by SUSAN RUSSELL at 4:55 PM

It's a decent article, but it's pretty stunning that as capable a scholar as Miles would make a couple of whoppers:

But against expectations ... the ordination of a gay bishop in the United States brought a strong conservative reaction in 1998.

[Of course, the "the ordination of a gay bishop in the United States", +Gene Robinson, happened five years AFTER Lambeth 1998]

Resolution 1:10 of that year’s Lambeth Conference, backed heavily by conservative African prelates, declared that homosexual practice was “incompatible with Scripture,” called for a moratorium on gay marriage and gay ordination, and strongly implied that Rowan Williams, the current archbishop of Canterbury, should excommunicate the Episcopal Church in the United States if it did not turn the moratorium into an outright prohibition by 2008.

Rowan Williams, "the current archbishop of Canterbury" in 1998? And I don't think anyone except maybe David Virtue thought in 1998 that Lambeth 1.10 meant TEC "should [be] excommunicate[d] ... if it did not turn the moratorium into an outright prohibition by 2008"!

I'm used to having to correct sloppy revisionist history from reasserters. It's really disappointing to have to do so re Miles. [Whose royalties from God: A Biography would have ME sitting pretty! ;-)]

A strong conservatvie reaction against Gene Robinson's ordination as Bishop was against expectations? In what alternative universe? I mean, you didn't have to be in favor of that reaction to understand that it was going to happen. You would have to have been pretty self-absorbed not to figure out what was going to happen.

Susan, you think that in 10 years TEC will be about the size it is now? What are the membership numbers for the last 10 years? I don't have them at hand, but I'd guess that they have been declining for years. Even getting them to flatten out would be a victory. My guess is that TEC membership will continue to decline.

Yes, beyond expectations. Absolutely. Who knew that "loyal opposition" conservatives would go so far to split the church they couldn't control?

As for growth, we can check back in in 10 years. We have 85 in our new members class this fall, however. So I'm open.

Susan, in the run-up to Robinson's consecration it became apparent to me that his supporters thought this was going to be the same thing that happened when women were first ordained but that the opponents felt entirely differently about the matter. It's clear to me that the supporters of Robinson's ordination were surprised, but I sure wasn't. They were told, but they didn't want to hear it; they didn't listen.

Understand that's an assessment, not a political position. I take no pleasure in it.

Our church was born in dissent. This is something that is quoted in various forms time and time again when people talk about what's going on. The implication (or sometimes explicit reference) is that schism over dissent is somehow un-Anglican, and that the "conservatives" are being un-Anglican by not staying while agreeing to disagree.

But what has to be remembered is that while there was dissent over some things (the authority of the Bishop of Rome, etc.), there was strong agreement over other things, as well as over the very objects of dissent. What we have now is dissent over something that the two sides previously took as a very basic area of agreement. On that basis the history of Anglicanism would lead us to expect a schism.