L.A.Mayor Villaraigosa Steps UP Against Proposition 8! 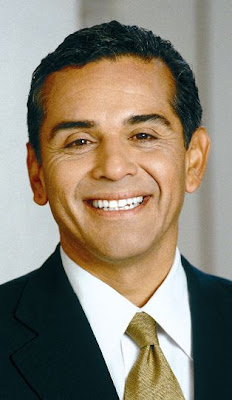 I entered politics because the America of my dreams includes everyone, not just a few.
Too many people have suffered injustice, discrimination, and inequality. It's time to bring every American out of the shadows and into the light. Our laws should not be used to single one group out to be treated differently. Instead, our laws should guarantee the same fundamental rights to every Californian.
.
Same-sex marriage is the law of the land in California. In my legal capacity as Mayor of Los Angeles, I have proudly officiated many same-sex weddings since the Supreme Court ruling in June confirmed the constitutionality of these unions.
.
These are loving, committed couples who want to get married for universal reasons: they love, care for, protect and take responsibility for each other.
.
I vow to vote No on Proposition 8 because I believe our civil society demands that we uphold -- not eliminate -- these fundamental rights. I believe all Californians deserve to be treated equally. And I believe that government exists to protect individual rights, not to undermine them.
Unfortunately, polls now show that the anti-marriage equality "Yes on 8" campaign is leading, just as vote-by-mail ballots arrive in voters' mailboxes across California. The "No on 8" campaign needs our help today to get the marriage equality message out on TV immediately.
.
That's why I'm taking a stand against Prop 8 today by contributing $25,000 to the "No on 8" campaign. And I would like you to join me by digging deep and contributing whatever you can afford -- whether it's $5, $50, $500, or $5,000 -- to the "No on 8" campaign on Courage's ActBlue page right now:

Opponents of marriage equality have blanketed California with misleading ads and have raised an unprecedented sum of money, outspending the "No on 8" campaign by over $10 million. In fact, the "Yes on 8" campaign received so many individual contributions, both large and small, that the sheer volume crashed the Secretary of State's reporting system last Tuesday.
I know that many defenders of marriage equality just like you have contributed a lot of money so far to the "No on 8" campaign -- but we need to redouble our efforts now to match the flood of money raised by supporters of Prop 8.
Californians from across the political and cultural spectrum have united to fight Prop 8 and defend fundamental rights.
How much will you give to protect the fundamental rights of all Californians? I'm taking a stand against Prop 8 by donating $25,000 today. Can you contribute $25, $250, $2,500 or whatever amount you can afford.
Our state constitution protects our rights. It should not be used to deny civil rights to anyone.
Please join me in supporting the No on 8 campaign. And tell your friends by forwarding this Courage Campaign message. Together, we can take a stand for the right of every Californian to marry the person they love.
Thank you for vowing to vote No on --and contribute to the defeat of -- Prop 8.

Antonio Villaraigosa
Mayor of Los Angeles
P.S. With ballots arriving in mailboxes already, there's not much time to get the "No on 8" message out before November 4. Please take a stand for marriage equality today by contributing what you can right now.
Posted by SUSAN RUSSELL at 3:12 PM

Dios mio, que rico! Go Antonio, what a great thing to do.

And as he said... con prisa, time is running out.

Now, Susan, as owner of rescue dogs... can you someday talk to him about getting off his butt to DO something about the LA Shelter situation (after the election)?

He spoke the right words in campaigning, but has done nothing.

I was just on the phone with my friend who lives in Silver Lake... He and his partner and a group of men had a big gala fundraiser for No on 8 at Sky Bar

Well he was telling me that this gala was the largest fund raiser so far... $250K.

It was at this particular gala that the Mayor stepped up with the amount that you mention here.

It immediately made me refer back to this post!