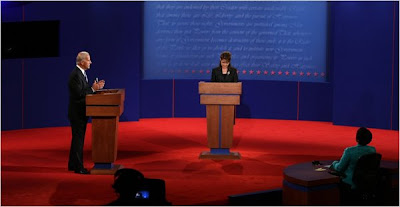 .
What a relief. In spite of all the predictions of crash and burn in tonight's debate, we got 90 minutes of full sentences and well-articulated positions of diametrically opposed visions for America as we dig out of the Bush years and look forward to the future.
.
Good for Sarah Palin. She did her homework ... and she clearly internalized her talking points (to the point of not actually answering several of Gwen Ifill's questions, but let's not quibble) and I was frankly relieved to see the energy turning to the issues in front of us and away from the personality-focused feeding frenzy of the last few weeks.
.
Here was one of my favorite bits, thanks to CBS (you have to watch a brief commerical but I think it's worth it):
.
Watch CBS Videos Online
.
Of course I thought Biden "won." He was smart, clear, detailed and -- for my money -- came down where I wanted him to on his vision for what our national priorities should be. Of course, there are those who argue you can "win by not losing" ... as one of the pundits was just saying about Palin's performance.
But "not losing" isn't enough to bring about the game-change McCain needs to convince the American people that for all his talk about his "Maverick" ways, we'd be looking at more-of-the-same if we handed the keys to 1600 Pennsylvania Avenue to another Republican at this point. (And although I was genuinely relieved by the more respectful tone and timbre of the both the debate and post-debate critique, I did allow myself to be amused by one of hte commentators who described Palin's style as "relentlessly colloquial" -- which one finds either charmingly refreshing or deeply annoying).
.
So now we're ... maybe, please-please-please ... back to the issues. Finding a just end to an unjust war. Figuring out how to bail out a country staggering under the weight of 8 years of failed Bush economic policy. Fixing the health care mess, bolstering our education system and working with global partners to do something to solve global climate change.
.
Tick-tock to November 4th!
Posted by SUSAN RUSSELL at 7:46 PM

I too, am glad it was back to the issues.

Two things I was surprised about:

1. No question on Roe v. Wade or the abortion issue.

2. I was not aware until last night that Barack Obama and Joe Biden are against gay marriage.

Is that a new position for Obama?

I was mildly surprised at the number of issues where the two agreed, or at least, partially agreed.

I like Joe Biden as a person and after last night I like Sarah Palin as a person. I am encouraged that whoever will be the vice-president will have a child in Iraq which should (as you well know) bring the realities and worries of war directly into the White House. (I believe McCain's son has been there or will be soon, can't remember).

That dynamic was missing in my war, Vietnam. Many of the policy and lawmakers obtained deferments for their children which divorced them from the pain and worry of war.

But like you, it was a refreshing change to see a debate that turned on the issues and not on sound bites or ads.

The first McCain-Obama debate was a snoozer, I hope the two of them will step it up a little and match last night's intensity.

p.s. By the way, McCain has suspended his campaign here and pulled all his ads (which means less of both political ads on TV- yeah!) as he has conceded Michigan and its 17 electoral votes to Obama. Didn't know if you had heard that, but our economy is so bad here (for a lot of reasons) that any party in power is in trouble here.

For weeks, you attack Sarah Palin's integrity and intellect and now suggest it is time to get back to the issues. It is lamost comical to watch. BTW - how did you like Joe Biden's statements that he and Obamarama oppose defing marriage to include same-sex couples? Guess the messiah hasn't got the guts to publicly affirm his intentions.

FWIW, Obama has stated that marriage should be left up to the states, and he personally is opposed to giving the name "marriage" to gay folks--though favors civil unions having all the rights and privileges save the name.

I agree, it is craven of the Dems to promote "separate but equal". Of course, politics is like making sausage and looking too closely at the recipe generally isn't for those with queasy stomachs.

But I wonder how much the homophobic rightwing base liked Sarah Palin's views of toleration and family benefits. Hmmm, she's not quite on message either.

IT
Who will be Gaily Marrying her beloved in a week+!