People of Faith Voting No on 8 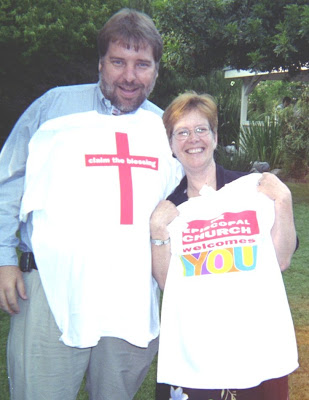 Marriage Responsibility -- for all

WHEN I read "Same-sex marriage foes stop at Whittier church," an article about a visit by the Rev. Louis Sheldon to an area church, I read it from start to finish and realized I had to tell my story.

This summer, my wife and I attended several weddings of family and friends. One of the most meaningful ceremonies we attended was for Daniel and Gary, a couple who had already been living in a committed, monogamous relationship for over 15 years.

They had already shared all that they had and all that they were, but now they were getting married with the witness of friends and family. There was no press or T.V. cameras present and no political statements - just two people deeply in love, standing before a judge in their backyard exchanging vows of total commitment to each other.

My wife and I sat there holding hands with silly smiles on our faces as we prayed silently to God for this couple that they would continue to be blessed and guided in their life journey together, now finally called a marriage.

We are both Episcopal priests and are well aware that some would invoke God and the Bible to condemn Daniel and Gary. Sadly, many people hear condemnations from ministers like Rev. Sheldon and think that this is the only Christian response to gay people. The fact is, many people of faith strongly support marriage equality and will vote no on Proposition 8. We will vote no because it would take away marriage for same-sex couples in California and leave our friends - and so many others - in grief.

The article quoted Whittier City Councilwoman Cathy Warner, who is Mormon, as saying, "I personally believe in the sanctity of marriage between a man and a woman." On one hand, I agree with this because that is what I experience in my marriage to my wife. On the other hand, I also saw that same sanctity of marriage before us when Daniel and Gary promised devotion to each other.

But regardless of how people of faith feel about gay people, my wife and I believe that the vast majority of Californians - even many conservative people of faith - realize that this is a simple matter of fairness.

It's not fair to take away marriages from loving couples. No church will be forced to perform marriages. Even though divorce is legal, Catholic priests are not forced to perform weddings for divorced people. Faith communities will continue to have the right to practice what they preach.

Our Episcopal Church has been in the news recently because of disagreement over gay people. But, despite our differences, California Episcopal bishops urged people to vote "no" on Proposition 8. Bishops from both northern and southern California spoke about such core values as love and mutual responsibility. They said it best, "society is strengthened when two people who love each other choose to enter into marriage, engaged in a lifetime of disciplined relationship building that serves as a witness to the importance of love and commitment."

The bishops recognized that keeping marriage available to same-sex couples is more than beautiful backyard weddings; it means that loving couples have lifelong obligations to care for one another that are not easily dissolved.

Only with the state's permission, through divorce courts, would this responsibility be lifted - and not without consideration for the support of both people. This model of lifelong commitment for all couples, gay or straight, goes far beyond civil unions which can be ended with a letter to the county courthouse.

The Rev. Bruce W. Gray is the rector at
St. Matthias Episcopal Church in Whittier.
Posted by SUSAN RUSSELL at 7:34 PM

Thank you for this eloquent letter. It is just what I need for my neighbor who is valiantly trying to grasp the consequences of our (Arizona) constitutional amendment proposition 102. Susan thank you for your eloquence. I know you will speak so well tomorrow morning on the radio with that 'gentleman'; he may leave the station a changed man! :)