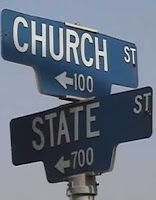 Pastors plan to speak this weekend in favor of McCain. That should get the IRS' attention.
September 27, 2008
Congress, the 1st Amendment states unequivocally, shall "make no law" that interferes with the free exercise of religion. That's a sound principle that has served this nation well, and one that undergirds our free speech and assembly rights as well. In practice, it is accompanied by a modern corollary: The government agrees not to tax churches and other nonprofit organizations, as long as they agree to limit their speech. They may preach on God and country, on war and peace, but they must not endorse candidates for office if they want to avoid the tax man. As Christ enjoined: "Render therefore unto Caesar the things which are Caesar's; and unto God the things that are God's."

To be sure, it's a bargain whose benefits are debatable. It might make more sense for the government to tax churches just as it taxes other organizations that operate under the 1st Amendment (newspapers and TV stations, for instance), and we'd be happy with churches that pay taxes and ministers who endorse candidates. But under today's rules, churches that have accepted the exemption also have accepted the prohibition against endorsements, and most faithfully abide by them.
Comes now, however, a group of ministers in California and elsewhere who intend to use their pulpits this weekend to urge parishioners to support GOP presidential candidate John McCain. "Nobody who follows the Bible can vote for" Democrat Barack Obama, one member of the cloth told The Times' Duke Helfand.

That statement is staggering in its presumptuousness -- how comfortable it must be to know which candidate is favored by God. Moreover, while it advances one American value (speech), it violates another (the separation of church and state). Both Jesus and the framers of the Constitution saw the value in such separation, which prevents the suppression of religion by the state and ensures that our civil institutions do not favor one faith over another.

Conservatives are not alone in pushing the boundaries of the tax exemption. In the 2004 presidential campaign, a pastor at All Saints Episcopal in Pasadena condemned the war in Iraq just before election day, and the IRS responded with a grueling, two-year investigation. The comments were provocative, but they were not candidate-specific and fell within the generally accepted range of religious discourse. The tax code does not prevent pastors from opposing war.

By contrast, Sunday's effort is deliberately political and specifically targeted at favoring McCain, and thus directly challenges the rules on political participation.
"My kingdom," Jesus said elsewhere in the Bible, "is not of this world." Would that his ministers better followed his example.
Posted by SUSAN RUSSELL at 9:25 AM

What part of "shall make no law" does the IRS and the government not understand.
Are not the "Laws" that attempt to restrict religious freedom through the IRS - Laws.
Congress shall make no laws, sounds pretty simple to me.
Where will the government draw the line. Maybe they will decide that since Rev. Russell is paid by "non-profit" and "tax-exempt" funds that she cannot express her public preferences for a candidate.
You may say that sounds extreme, but 100 years ago, it would have been considered extreme that the government would take part of a citizen's income for taxes.
So we need to be careful what we excuse the government from doing, because a slippery slope leads in one direction - down.
It would simply be easier if we all just went back to First Principles and agreed that free speech is not subject to any government regulations.
Non-profits and tax-exempt organizations have been winking at the regulations for years anyway.
When Rev. Bacon preached what he did four years ago, everyone knew what he was saying. He was supporting Kerry. It's simply a cat and mouse game that shouldn't be played.
Rev. Russell should be free to say that she believes Barack Obama is the best choice for America in 2008, and others are free to do likewise.
Time to tell the government to butt out.

"Nobody who follows the Bible can vote for" Democrat Barack Obama.

But Bible followers can vote for Bush-Cheney, who brought us torture, rendition, pre-emptive war and occupation? They can vote for McCain, who ate cake with George Bush as the levees failed in New Orleans?

I may not be the Bible expert that some of these protesting pastors, are but I seem to recall that Jesus, who figures rather prominently in the Bible, said a lot of things about the poor, the sick and the hungry – before he was tortured to death by the Roman Empire.

The law granting tax exemptions to those who donate to various charitable and / or religious institutions carries with it the perogative of deciding what is such an institution. IRS is charged with making that determination. Under the relevant law that is not creating a religion or restricting the right of free exercise thereof. So, IRS is not violating the constitution. It is obeying Congress. Anc no one is saying we cannot have a religion that endorses candidates, only that such a religion is not exempt from taxes and our contributions to it are not exempt.

Actually, I suspect the impact on the churches were the Federal tax code chaged would be almost tentirerly on the contribution side. I have no idea how much of the income to a church comes from those seeking tax exemption, but some does. Having served on a vestry, the idea that the church has net profits to tax is laughable.

Were States to follow suit and permit the imposition of property taxes, the impact could be immeadiate and harsh. Bus freedom is seldom free. If we have to pay, we pay.