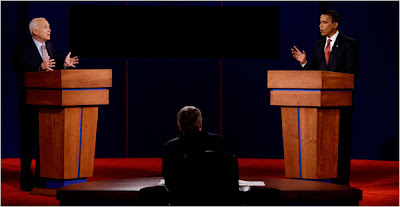 Doug Mills/The New York Times
I only got to watch 2/3 of the debate live because I was doing a radio interview that probably nobody listened to because everybody else was watching the debate I was missing. Whatever. I'll catch the other 1/3 on Tivo ... but now we're watching the "pundits" ... and I'm wondering what ya'll think???
.
Of course, the part I loved was Obama standing firm against the Iraq War ... I agree with him on the issues ... and he, well, he was just BETTER!
.
So far the early polls seem to agree with me ... (which of course, I like!) ... but there are still miles to go before we rest on this one.
.
Next stop, VP debate ... and I'm not scheduling any interviews during that one! :)
Posted by SUSAN RUSSELL at 8:44 PM

I was stunned and incredulous that neither of these Senators could say with any clarity where they stood on the current economic crisis or what they would do.
Neither displayed anything close to leadership on that issue.
I wish Ralph Nader was there, because he has been decisive on what should have been done.
There were no surprises in the foreign policy area so I don't see where this debate switches any minds made up. As for those on the fence, I don't know.

I did not watch it. I did listen to most of it. ;;shrug;; I think people who liked a candidate think he won. The real question is how the undecided who watched or listened react and I have no read on that.

I thought this debate was pretty uneventful. But, I can't wait for the Veeps! What will Sarah Palin say next?! It's a circus waitin' to happen.