The " NO on 8" Press Conference in Los Angeles today

Here are a few pictures from the "No on 8" Press Conference at the Los Angeles Cathedral Center today. We were gratified to have a great media turnout and a great show of support from all around the diocese. 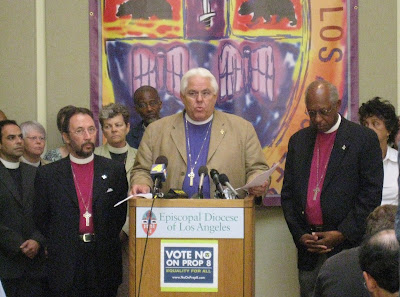 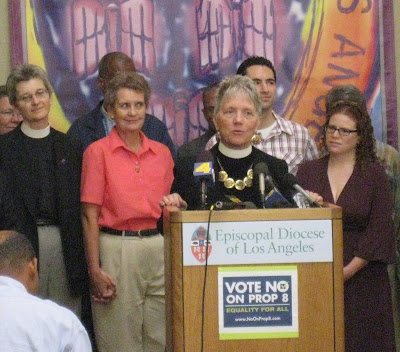 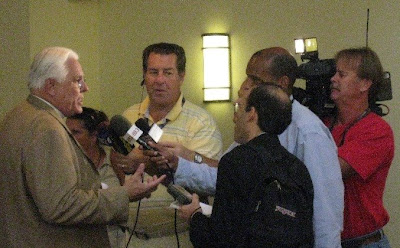 Here's a link to the NO ON 8 Statement issued today by ALL SIX CALIFORNIA EPISCOPAL BISHOPS!
And here's video of the press conference ...
.
Episcopal Bishops Say Yes To Gay Marriage @ Yahoo! Video
Finally, here's +Jon's statement given this morning:
.
We are here today to affirm that all Californians have the same access to civil marriage under the laws of our state.

Our state legislature has spoken twice on this matter. Earlier this year the California Supreme Court opened the way for both same-gender couples and heterosexual couples to have equal protection as married partners under the law.

Proposition Eight would eliminate this equality for same-gender couples and rescind their rights as married partners. Therefore Proposition Eight must be defeated. I must vote “no” on this effort to re-write our state constitution with language of exclusion.

I join with my sister and brother Bishops of all six Episcopal Dioceses in California in our unanimous statement: “We believe that continued access to civil marriage for all, regardless of sexual orientation, is consistent with the best principles of our constitutional rights. We believe that this continued access promotes Jesus’ ethic of love, giving and hope.”

As Bishops, we have said that “we do not believe that marriage of heterosexuals is threatened by same-sex marriage. Rather the Christian values of monogamy, commitment, love, mutual respect and witness… are enhanced for all by providing this right to gay and straight alike.”

For these reasons, we are compelled to protect the fundamental dignity, freedoms and fairness of all Californians. I urge you to search your conscience as you review Proposition Eight, and vote No.

I love Jon Bruno. If I were the least bit inclined towards faith, he probably could push me over the edge.

I'm not, so he can't, but he is a tremendous, tremendous figure. The LA diocese is so lucky to have him.

I first learned of him from a Jewish friend of mine in Silverlake who explained how the LA Episcopal Diocese and Jon Bruno saved the jewish community center there.

Now THAT'S a bishop. What a force of nature!

Thank you for this, my prayers go with you all for the vote in November, but most of all I give thanks that such a bishop, such a diocese, such wonderful people, exist within this Church. Just the fact that this video has reached this part of the kingdom is a cause for rejoicing.