The ABofC's Sermon from Zanzibar 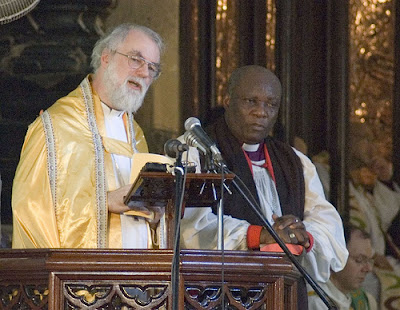 Archbishop of Canterbury Rowan Williams preached
at Christ Church Cathedral in Zanzibar with help from a Swahili interpreter.
[photo credit: Scott Gunn]
.
There's a link to the text of the Archbishop's sermon here -- and here's some commentary from yesterday's NYTimes:
.
Facing a possible church fracture over the issue of homosexuality, the spiritual head of the Anglican Communion reminded bishops of the need for humility as church leaders gathered Sunday for services on the island of Zanzibar.
.
“There was a great saint who said God was evident when bishops are silent,” the Most Rev. Rowan Williams, archbishop of Canterbury, told hundreds who packed a 173-year-old stone cathedral. “There is one thing a bishop should say to another bishop; that I am a great sinner and Christ is a great savior.”
.
Nearly three dozen leaders of the world’s 77 million Anglicans have gathered in Tanzania in an attempt to resolve the long-simmering conflict over homosexuality. The most conservative archbishops, led by Archbishop Peter J. Akinola of Nigeria, are demanding that the group take firm action against the Episcopal Church of the United States, which consecrated a gay bishop in 2003 and has not banned blessings of same-sex unions.
.
On Friday, Archbishop Akinola and six other archbishops refused to celebrate the Holy Eucharist with Katharine Jefferts Schori, the presiding bishop of 2.3 million members of the Episcopal Church, the American branch of the Anglican Communion. To celebrate communion with Bishop Jefferts Schori, who supports gay clergy and church blessings of same-sex unions, “would be a violation of Scriptural teaching and the traditional Anglican understanding,” said a statement on the Nigerian church Web site.
.
Some observers interpreted Archbishop Williams’s sermon as an implicit rebuke of those archbishops. If so, though, Archbishop Akinola was not there to hear it. [Read the rest here]
Posted by SUSAN RUSSELL at 12:48 PM