"Life is too short to get too flustered" 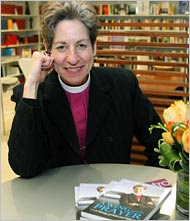 One more and then I'm going to bed. Really. But my email inbox just went "ping" and there was this NYTimes article -- and it was too good to pass up posting.

At a book party last week at the New York headquarters of the Episcopal Church, a line of more than 100 fans waited to have the church’s new presiding bishop, Katharine Jefferts Schori, sign copies of her new book of sermons, “A Wing and a Prayer.”

Bishop Jefferts Schori, the first woman presiding bishop in the history of the Anglican Communion, appeared a bit surprised at the celebrity treatment but clearly enjoyed the sentiment.

She is about to head off to a hostile reception.

This week, Bishop Jefferts Schori will represent the Episcopal Church at a meeting in Dar es Salaam, Tanzania, with the presiding bishops of the 37 other provinces in the global Anglican Communion, the world’s third-largest church body. Some of those bishops, known as primates, have broken their ties with the American church after it ordained an openly gay bishop and permitted the blessing of same-sex unions.

Some primates have said they will not sit at the same table with Bishop Jefferts Schori. Some have threatened to walk out of the meeting.

In an interview in her office last week, Bishop Jefferts Schori said the conflict was more about “biblical interpretation” than about homosexuality.

“We have had gay bishops and gay clergy for millennia,” she said. “The willingness to be open about that is more recent.”

She said that what she wanted to convey to her fellow primates was that despite the highly-publicized departure of some congregations (a spokesman said 45 of 7,400 have left and affiliated with provinces overseas), the Episcopal Church has the support of most members, who are engaged in worship and mission work, and not fixated on this controversy.

“A number of the primates have perhaps inaccurate ideas about the context of this church. They hear from the voices quite loudly that this church is going to hell in a handbasket,” she said. “The folks who are unhappy represent a small percentage of the whole, but they are quite loud.”

In the global picture, however, those unhappy with the Americans are a significant bloc, and some are ready to cut off the American branch of the Anglican Communion. Conservatives were emboldened recently when an influential bishop, N. T. Wright of Durham, England, said in an interview, “Even if it means a bit of pruning, the plant will be healthier for it.”

Bishop Jefferts Schori said the Archbishop of Canterbury, the Most Rev. Rowan Williams, had accommodated the conservatives because he also presides over the Church of England, where the conservatives are a more substantial presence than in the United States, and are increasingly assertive.

Bishop Jefferts Schori, who is 52, exudes a cool presence, sitting erect in a crimson shirt and white clerical collar. She uses few words to make her points. In her previous career, she was an oceanographer, specializing in squid and octopuses.

Ordained a priest only 13 years ago, she is the former bishop of Nevada, where she permitted blessings for gay couples and voted to confirm the Rev. Canon V. Gene Robinson, who is openly gay, as bishop of New Hampshire in 2003. She was elected presiding bishop last June, a nine-year assignment.

She said opposition came primarily from a “handful of primates,” led by Archbishop Peter Akinola of Nigeria, with support from those in Uganda and Rwanda. She said they had made it appear as if the bulk of the Anglican Communion was arrayed against the Americans, when that was not the case.

“It’s abundantly clear that there’s a diversity of opinion in the provinces of the Communion” she said. Asked why they are not more vocal, she said, “I think that has to be tenderly nurtured. You don’t want to put people in a precarious situation” by encouraging them to speak out against their own primates.

One African bishop recently did so. After the House of Bishops in Tanzania voted in December to cut ties to the Episcopal Church and stop accepting its donations, Bishop Mdimi Mhogolo, who leads the Diocese of Central Tanganyika, wrote a letter saying, “The issue of homosexuality is not fundamental to the Christian faith.”

At the meeting in Tanzania, Bishop Jefferts Schori is to sit down with the primates of 13 provinces that do not ordain women as priests, not to mention as bishops. But she said her sex was not the reason some primates were preparing to shun her. The problem is that some bishops say the Episcopal Church has failed to repent or to declare a moratorium on gay blessings, steps required by a committee of officials commissioned by the Archbishop of Canterbury in 2004.

She is likely to be face to face with Archbishop Akinola, who has created a rival network of conservative churches in the United States.

Bishop Jefferts Schori said that if she is rebuked at the meeting, it will not be anything new; she experienced that before as an oceanographer: “The first time I was chief scientist on a cruise, the captain wouldn’t speak to me because I was a woman.”

Asked how she would respond if primates walked out on her, she said, “Life is too short to get too flustered.”
Posted by SUSAN RUSSELL at 9:28 PM

Reverend Susan: I was in Pasadena the second week of December as a visitor - your sermon brought tears to my eyes - and on the way out I gave you a big hug. Now I understand why your message touched me so!!! And now I see you are Integrity president too! God bless you and thanks for ALL you are doing. Jon W. Denver,CO jcobbc01@msn.com