Don't Miss: The Camel's Nose and the Primate's Tent

Mark Harris is being brilliant as usual over at PRELUDIUM, reflecting on the upcoming meeting of the Primates in general and on the ongoing efforts of the Episcopal Insurgents to get their nose under the Anglican tent in specific. 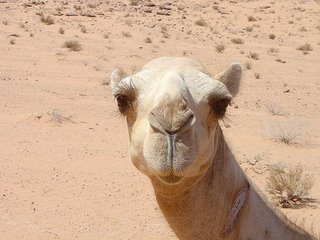 You'll want to read it all here ... but here's a snippet to get you started: The object of the exercise is to get the nose in the tent, and then the whole body, and squeeze the Episcopal Church out.

And, just so the consistency is really clear: the cleanliness is next to Godliness crowd who won't sit with consecrators of Gene Robinson have extended their promise. They will not sit at Table with the Primate of the Episcopal Church.

This table thing has taken an odd turn. First it is refusal to sit with the unclean at the table of the Lord, i.e. at Eucharist. Now it is threatened as a refusal to sit with sinners at the Table of the Lord Archbishop of Canterbury. The first refusal seems odd, given Our Lord's willingness to eat that last meal with a whole gang of people who he knew perfectly well would abandon him. The second refusal seems perverse, since the invitation is in no way dependent on the relative sanitized character of those invited.
Posted by SUSAN RUSSELL at 10:38 AM