Listen to the majority African voice of grace 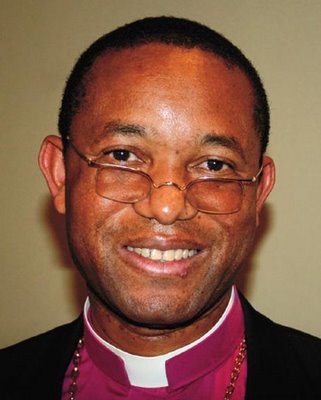 “One of the things which most amaze me in this whole debate is the manner in which lobbying in America has been used to influence opinion, decision, and relationship."

Listen to the majority African voice of grace
Bishop of Botswana, the Rt Revd Musonda Mwamba

[From Pat Ashworth's report in the CHURCH TIMES:]
LOUD voices from Africa, aided by the “almighty dollar” and internet lobbyists, are distorting the true picture of what Africa’s 37 million Anglicans really think about sexuality and the future of the Anglican Communion, says the Bishop of Botswana, the Rt Revd Musonda Mwamba.

The Bishop, by background a lawyer and social anthropologist, was giving the keynote address to senior judges, lawyers, bishops, and clergy at the Ecclesiastical Law Society conference “The Anglican Communion: Crisis and Opportunity”, in Liverpool at the weekend. The minds of most African Anglicans were concentrated on life-and-death issues, and they were “frankly not bothered about the whole debate on sexuality”, he said.

In an incisive address, the Bishop concluded that the minority of Africans who had “the luxury to think about the issue” did not want to see the Communion disintegrate. They valued the bonds of affection, and would prefer to follow the process recommended by the Windsor report. He rebutted as “simplistic and a distortion of the truth” the belief that the African provinces were a monochrome body.

The voice many people heard was the Church of Nigeria’s, a conservative voice, which embodied various streams of influence, and echoed the cultural abhorrence of homosexuality. It was “a voice of protest, which advocates separation rather than reconciliation”. Perhaps unconsciously, it was also influenced by interfaith strife in the country.

Charting the history leading to Nigeria’s rejection of the primacy of the Archbishop of Canterbury, the Bishop said that the influence of the Primate of All Nigeria, the Most Revd Peter Akinola, went beyond Africa to the United States, where, through the creation of the Convocation of Anglicans in North America (CANA), he had encouraged like-minded Episcopalians to cut ties with the Episcopal Church in the United States.

Bishop Mwamba described this as “a voice prepared to exclude those whose voices or views are deemed incompatible with the Bible, a voice relatively quiet in speaking out on life-and-death issues of poverty, AIDS, and responsible governance. But, having said all that, we must keep in mind that there are many bishops, clergy, and laity who do not accept all that this voice represents, and who nevertheless find themselves silenced.”

Read it all here ... and give thanks for the witness of Bishop Mwamba!
Posted by SUSAN RUSSELL at 7:21 PM