Another leak on the "secret panel" story

As noted earlier on this blog, our friends at Episcopal Cafe have been on the story of notes leaked from the secret panel selection committee. Today -- another stunning development: 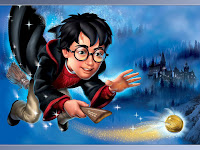 An errant email -- evidently intended for +Henry Parsley but somehow sent to someone named Henry Parsnip has been forwarded to members of the LGBT leadership caucus -- and it indicates that at one point Harry Potter was considered for a spot on the committee.

Whether he made the final cut is -- as yet -- unknown, as the panel members remain closeted. But the notes on Potter include:

Pro: comes with his own invisibility cloak so secrecy will not be a problem and being a warlock add needed diversity

Con: rumors that he might have connections with some who practice Buddhist meditation could be problematic

wow leaks all over -- could this ship be sinking? See here

I always thought it would be Professor Dumbledor....

Let's hire a top notch private investigator to learn who these folks are or will be and then OUT them. This is ridiculous. The whole Church deserves input on this important issue, not secrecy or delay.

Well, my gaydar went up. Harry is just too gay to be on that committee.