QUICK! CHECK! Hell Must Be Freezing Over! 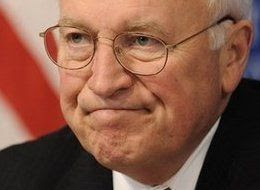 Dick Cheney rarely takes a position that places him at a more progressive tilt than President Obama. But on Monday, the former vice president did just that, saying that he supports gay marriage as long as it is deemed legal by state and not federal government.

Speaking at the National Press Club for the Gerald R. Ford Foundation journalism awards, Cheney was asked about recent rulings and legislative action in Iowa and elsewhere that allowed for gay couples to legally wed.

"I think that freedom means freedom for everyone," replied the former V.P. "As many of you know, one of my daughters is gay and it is something we have lived with for a long time in our family. I think people ought to be free to enter into any kind of union they wish. Any kind of arrangement they wish. The question of whether or not there ought to be a federal statute to protect this, I don't support. I do believe that the historically the way marriage has been regulated is at the state level. It has always been a state issue and I think that is the way it ought to be handled, on a state-by-state basis. ... But I don't have any problem with that. People ought to get a shot at that."

Read the rest here ... and if you were ever planning on throwing snowballs in hell, today may just be your day!
.
Posted by SUSAN RUSSELL at 1:18 PM

He's only saying that because he knows that we'll never get full compliance without federal mandate.

If we had approached Civil Rights for people of color, we'd have the equivalent of Apartheid in these United States today.

Okay, okay - so I suppose I should be happy. What was one of those talking points you posted in that video? Let me give my own version about this:

This is like saying, okay, we'll let you on the bus, but in some states, you'll have to sit in the back, and in other states, you can't even ride.

I've probably be at this too long. Which is precisely my point.

The President's position is getting more lame by the minute.

I never said I believed him -- just that I figured I'd see the headline "Cheney Supports Gay Marriage" when hell freezes over.

"Even a total douchebag, war criminal like Dick Cheney can see that marriage inequality is wrong."

Hell is fine the Cubs are still loosing.

I think former Vice President Cheney's comments really show that we all are largely products of our own experiences. I believe he loves his daughter. Were it not for his daughter, we can agree he would oppose gay marriage. Because of his daughter, I think he has in some ways, however limited or incompletely, begun to see LGBT policy issues in a different light.

As President Obama tried to explain at Notre Dame recently, even strong opponents can find some common ground, somewhere.

I think the President had two great take-away lines at that Notre Dame speech: "don't reduce people to caricatures" and "use fair words". That advice could apply both to one's allies and one's opponents.

But, we've been happy with this sort of apartheid in the church for a long time.