Why we still need Pride Parades 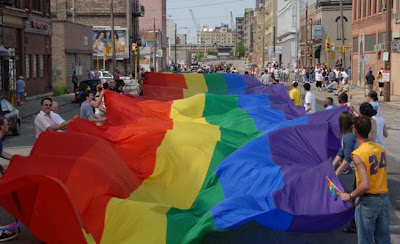 Thanks to Ann Fontaine for the link to this wonderful reflection on Sans Fig Leaf by Gene Breshears. It's entitled:
Love Conquers
While I was growing up the adults in my life (and the books they had me read, the movies they let me watch, etc) taught me many lessons:

* love conquers all
* might does not make right
* it is better to eat cheap soup with someone you love than a lavish meal with people who hate you
* it's better to lose doing the right thing than to win by cutting corners
* you can be anything you want if you work hard enough
* be proud of living in the land of the free
* treat others the way you wish to be treated and you will be blessed
* you have to let other people live their lives as the wish if you expect to live yours as you wish
* love, forgiveness, and compassion are better than distrust, blame, and rejection
I could go on and on. Some might consider those cliches or simply trite, but I really believed them all. And the people who taught me those lessons all claimed they believed, too.

Ironically, the people who had been most emphatic about those lessons were the same ones who ignored all of them when they found out I was gay. And some of them figured it out before I did. I was getting beat up while being called f*ggot and c*cks*cker and the like before I knew what those words were. In grade school "sissy" and "pansy" were the preferred insults, but the others snuck in there, too.

Society tells those things so relentlessly, that for part of our lives we believe them. I foolishly tried to fit in, to hide my true self. I tried to be someone I wasn't. I tried to find a middle ground, where I only appeared that way to some people, but others knew. But eventually we all realise that a life built on lies, even really clever ones with grains of truth in them, can never withstand the ups and downs of real life. It's like the illusionary food in fairy tales--it doesn't nourish, it doesn't sustain, and it will eventually kill us.

They keep telling us that our love is wrong, and anything bad that happens is our fault. Never mind that much of the bad that happens is caused by their insistence that we're wrong, and the something crazy lengths they will go to prove it. Even as their assertions become less acceptable to society at large, they keep saying it. They've reframed some of the statements a little over time. As we have slowly won more people over to the idea of letting us live and let live, they've grudgingly reconciled themselves to allowing us a few crumbs here and there, but they seem to get even more defensive, the more crumbs we get.

Despite all the bad things that have been said and done, I still think those original lessons were true. And all the bad stuff is just bad stuff. Love conquored all that bad stuff. No matter how hard people tried to convince me I didn't deserve happiness, that I would never find love, that I and people like me were sick and depraved and dangerous, I'm happy to call the sweetest, kindest man you will ever know my husband.

Before Michael and I ever met, I spent a wonderful eight years with another sweet, loving man. A man who promised to love me for the rest of his life. And he did. I would have liked to have more time together--I wish he hadn't died, but the time we had was full of love and happiness. During the years when my family refused to even meet the man I loved, so that I was forced to stay away from family gatherings, we never had a bad holiday. Even during the years when money was tight, when we lived in a tiny apartment (the whole thing smaller than my current living room), our very old car was held together by bailing wire and hope, we had each other, and that silly saying about cheap soup with someone you love was proved again and again.

I wanted to live my life openly instead of hiding in fear and pretending to be something I wasn't. I wanted to be with someone I loved and who loved me back. I wanted to have talented and interesting friends who liked me for myself, and not what I could give them. I wanted to spend days laughing with those friends, writing, creating, reading, and just living a good and full life.

They told me I couldn't, and that it was wrong to even try.

They were wrong. Because I have all those things, and the reality of them has turned out to be even more wonderful than the dreams of my youth ever imagined. Life is good. It isn't perfect, but it's good. Despite the naysayers and the oppressors.

But just because my life is good doesn't mean I'm content. They keep saying all those hateful untrue things. They say them to their own children, even though some of those children are gay, just like me. Maybe they don't realize the damage they are doing. Maybe they really can't see the utter illogic and hypocrasy of their stands. Maybe they just can't see that they aren't giving love half the credit it deserves.

That's why we still need Pride Parades and Festivals and Protests and all the rest. That's why those of us who have survived the bad stuff and found our place in the world have to live our lives openly.

Yes, love conquers all. But you can't conquer anything by timidly hiding in a closet.
Posted by SUSAN RUSSELL at 6:39 AM

Wow! That's all I can think to say.
Doug

thanks, Susan - you cannot repeat these things too often. I truly believe the tide is turning - but, like for our faith - witness is critical. God bless