The ghosts of birthdays past ... 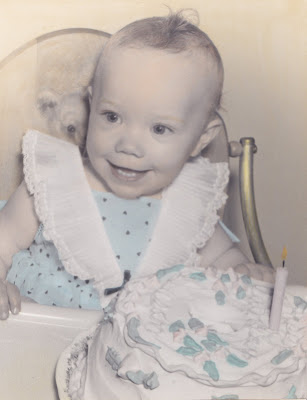 This is me -- 54 years ago today on my first birthday.

As you can see, I was groomed from a VERY early age to make the most of a birthday ... what's not to like about a day that's "all about you" AND involves cake?

And so I'm thinking tonight -- after a lovely day of lots of nice emails and phone calls from friends and family and a lovely dinner out with my sweetie AND a piece of cake -- of some of the ghosts of birthdays past.

But the one I'm going to write about -- briefly, as it's getting late and tomorrow is most decidedly NOT "all about me" -- is the one that was six years ago today: my 49th birthday ... the one that I spent in Chicago with Michael Hopkins and the House of Bishops' Theology Committee.

It seemed they had embarked on a theological study of same sex relationships (stop me if you've heard that one before) and had -- up until that point -- not actually talked to or with any live-in-captivity actual homo people. When that fact was pointed out ... and yes, I do recall that there was some jumping up and down involved in some quarters ... Michael and I received an invitation to come -- on June 10, 2003 -- to meet with them for 90 minutes at Seabury Western Theological Seminary.

And so there I was. With Michael. On my 49th birthday. On a day that was ABSOLUTELY not "all about me" ... and didn't even involve any cake. Elizabeth Kaeton would file this one under "The Things We Do For Jesus" ... and she would be exactly right.

We did what we were asked to do. We came. We met. And then we left and went downtown for what I remember as a quite excellent steak dinner -- and flew back to our respective "day jobs" -- wondering if "showing up" had been worth it.

Well, here's a clue: Six years later, that same Theology Committee is now engaged in ANOTHER "study" of the theology of same sex relationships, but this one they've farmed out to the "closeted sub-committee" you'll have read about if you follow this blog. And -- you guessed it -- neither Michael nor I ... nor any other bona fide, card carrying, live-in-captivity actual homo people are part of that process. That we know about. And yet it's touted to be part of "the listening process" we've heard so much about.

Well, here's a news flash. I wasn't born yesterday. (See photographic evidence above as case in point.) We have officially been there, done that and gotten the t-shirt and it is long past time to stop studying same sex unions and start celebrating them.

Here endeth the birthday rant. Think I'll go have another bite of that cake before I head to bed! G'night, all!
.
Posted by SUSAN RUSSELL at 8:45 PM

Happy Birthday (mine is in a few weeks)! Do we actually know that there are no glbt people part of the sub-committee? Or cannot you not say how you found that out?

My main point? SIX YEARS AGO ... they were supposedly doing the same thing ... and now we're supposed to wait til 2011?

And six years from now they will STILL be studying because it delays action.

I've been quoting Dr King today over on Daily Kos. I sent Andrew Sullivan an Email and even HE quoted Dr King.

From the Letter from a Birmingham Jail and we should all read it:

Frankly, I have yet to engage in a direct action campaign that was "well timed" in the view of those who have not suffered unduly from the disease of segregation. For years now I have heard the word "Wait!" It rings in the ear of every Negro with piercing familiarity. This "Wait" has almost always meant "Never." We must come to see, with one of our distinguished jurists, that "justice too long delayed is justice denied."

Happy Birthday! You have capsulized the feelings of so many so well (as usual). Especially in your response to Matthew.

Even if WE are represented (and whoever would agree to returning to the closet to be a part of this has compromised their credibility). Even if WE are well represented... WE are so over being "studied."

As you said, Susan: "Whatever."

At the risk of repeating myself (and you) "Oh, the things we do for Jesus."

Maybe they're trying to discern if we reproduce in captivity, and if not, why there are so darn many of us and where we come from.

While I am concerned about the anonymity of the committee, I don't give a fig about who is, and who is not on it. It's existence itself is the rub.

Where's the PB in all of this? The silence is deafening. I hope she hasn't gone all "institutional" on us.

Belated happy birthday but best wishes all the same.

Maybe we should all show up with some sort of cage around us with a banner that reads: 'Look! Live and in captivity! Genuine Ho-mo-sex-u-als!'

Happy Birthday, Mother Susan! I admire your honesty and your courage to speak your mind. The Church needs more priests like you. May God bless you and your beloved always.