As we move toward Anaheim and General Convention 2009, I'm getting more and more questions about "where does Inegrity stand on [fill in the blank]"

The following are from the FAQ sheet we came up with, responding to actual questions from real people in provincial meetings all around the church. Hope they'll be helpful! 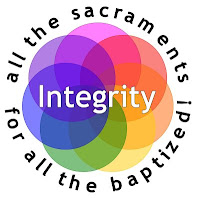 Doesn't B033 automatically expire at the start of General Convention 2009?

According to a recent opinion by the Chancellor to the President of the House of Deputies:

Therefore, Resolution B033, since it did not contain language stating when it will expire, remains the position of General Convention until General Convention revokes it, adopts something contrary to it so as to supersede it, or in some way determines that it is contrary to a Church rule of a higher order such as the Constitution or Canons and is therefore null and void or of no effect.

Has B033 actually been a factor in preventing LGBT candidates from being elected to the episcopate?

Absolutely. According to an April 2, 2009 ENS feature:

"The Standing Committee of the Episcopal Diocese of Western New York has told a newly formed bishop search committee that they are expected to 'honor the mind of the Episcopal Church regarding acceptable candidates for the episcopate as expressed through the General Convention.' The Standing Committee said in a posting on the diocese's bishop search website that the requirement referred to Resolution B033, passed by the Episcopal Church's General Convention in June 2006."

Until we move beyond B033, qualified candidates for the episcopate who are LGBT are being prevented from even being considered, much less elected.


There are a lot of resolutions about B033— which one does Integrity favor?

The one that will pass.

At this point, as with every General Convention, a variety of resolutions have been submitted with different approaches to the same goal: moving beyond B033. What is important is that General Convention 2009 acknowledges we have outlived “the season” we were told we needed B033 for and that we need to enforce our nondiscrimination canons when it comes to ordination.

We’ll be tracking legislation as it moves through committee and making decisions with our allies "on the ground" in Anaheim about what our legislative strategy is based on how those resolutions come forward to the floor.


My bishop says that the House Bishops won't rescind B033, so isn't working to move beyond it seems a waste of effort?

The resolutions regarding B033 will be starting in the House of Deputies so we are looking for "the senior house" to take the lead on this issue – which is usually how progress on social justice issues have happened in the Episcopal Church throughout the decades. If Integrity and our allies had waited for the House of Bishops to say they were ready to move forward on LGBT inclusion we would never have gotten started. It’s taken us 33 years to get this far and no effort to continue to move the church forward is wasted.
Posted by SUSAN RUSSELL at 10:27 AM

The Diocese of Chicago was just beginning a bishop search when B033 passed. Our standing committee told us that they were the ones who had to worry about B033, because it specifically addressed the consent process -- and that we needed to follow the more inclusive canon law. When we got to the election phase, we had Tracey Lind on the ballot. In retrospect, it appears that diocesan voters could not envision the rest of the church consenting to that election. So, while many people admired Dean Lind's competence and call to leadership, they did not vote for her. That said, we did elect and gain consent for a very fine bishop in Jeff Lee.

Given the B033 handicap, and the fact that lgbt persons are just beginning to be visible and familiar in some areas of our diocese -- it probably wasn't likely a lgbt person who wasn't already known and valued in the diocese would get elected. We have some outstanding lgbt priests in the Diocese of Chicago -- in the long run, I can envision one of them as bishop.

Which means my sense is that in the face of some degree of fear of the unknown coupled with the recent passage of B033, a week of presentation of nominees wasn't enough to overcome those barriers and allow Dean Lind to win. However, by being on the slate and her fabulous presence in person -- opened up the minds of many, many people who had been unthinkingly against or fearful of lgbt's in general ...

Until we move beyond B033, qualified candidates for the episcopate who are LGBT are being prevented from even being considered, much less elected.

Not true. In our most recent Episcopal election here in the Diocese of Chicago an openly lesbian priest was one of the candidates placed before the Diocese by the nominating committee in 2007. She was at all the "get to know the candidates" meetings and met with people in all the breakout sessions, stood for election and received votes. There was no difference between the way she was treated and any of the other candidates.

Now, as to the actual process: I was one of those Diocesean voters you mention. My opinion is that the main reason Tracey Lind didn't get many votes was that the voters didn't think she was anywhere near the best candidate. I'm sure that the issue of B033 was in some people's minds, but I doubt very much that it made the difference in whether or not she was elected.

Understand that I prayed on this issue prior to the first "get to know the candidates" meeting that I went to. I asked for the ability to listen to her while witholding judgement based on her sexual orientation. I told God that I wanted to stay open to an honest evaluation of her and asked for guideance and the ability to change my mind in case there was a conflict between my understanding of human sexuality and her qualifications.

Well, God always answers prayers. In this case He answered it by preventing the conflict in the first place. After listening to her it was quite clear to me that she was one of the least qualified candidates presented to us, and I voted accordingly.

In retrospect, it appears that diocesan voters could not envision the rest of the church consenting to that election.

You are, of course, welcome to your opinion. But I think that your assumption that the fact that she got very few votes for the election was due to B033 is unwarranted. She just didn't measure up.