We had word from the Bishop of New Hampshire (live from the NH State House this morning) that things were moving quickly on marriage equality today, but who knew things would move this quickly??? I was offline for most of the afternoon and was DELIGHTED to log on and find this article on the top of my inbox:

After rallies outside the Statehouse by both sides in the morning, the last of three bills in the package went to the Senate, which approved it 14-10 Wednesday afternoon.

Cheers from the gallery greeted the key vote in the House, which passed it 198-176. Surrounded by gay marriage supporters, Lynch signed the bill about an hour later.

"Today, we are standing up for the liberties of same-sex couples by making clear that they will receive the same rights, responsibilities — and respect — under New Hampshire law," Lynch said. 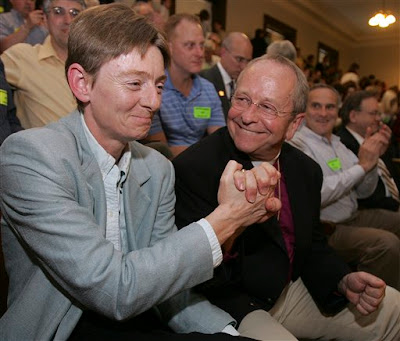 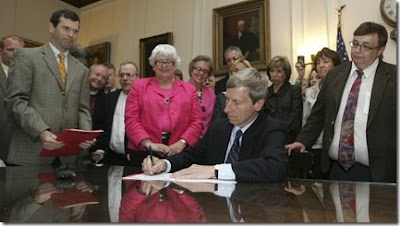 Read the rest here ... and Mazel Tov to the people of New Hampshire!
.
Posted by SUSAN RUSSELL at 4:41 PM

My only regret about this is that I wasn't there to see it happen in person! I am so proud to be a native New Hampshirite. This is, as we say, "wicked awesome!"

I so wanted to go to NH today on the VT Freedom to Marry Freedom bus but I had a jam-packed schedule. So glad NH has had its day.

What sets my brain spinning is how Gov Lynch can personally be against same-sex marriage, and yet make the statement:

"Today, we are standing up for the liberties of same-sex couples by making clear that they will receive the same rights, responsibilities — and respect — under New Hampshire law,"

How can one hold both views simultaneously?

It's a question I have for churches: this is about justice... which cannot be compartmentalized.

What does the Lord require of us, afterall, but "to do justice and love mercy and walk humbly with our God?"