"All the news that's fit to manufacture"

This Lambeth Conference has been a tough event for the press to wrap their brains ... and their deadlines ... around. 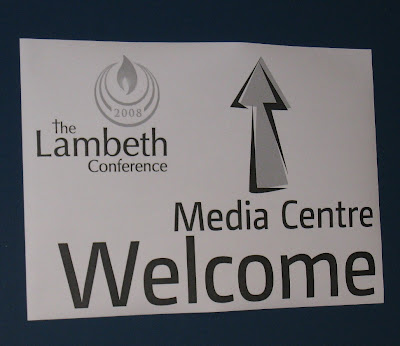 Here's the press room where the arduous task of getting the "breaking news" equivalent of blood-out-of-a-turnip out of a two-week conference designed to make as little news as possible happens. 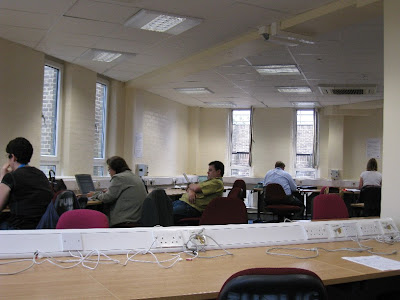 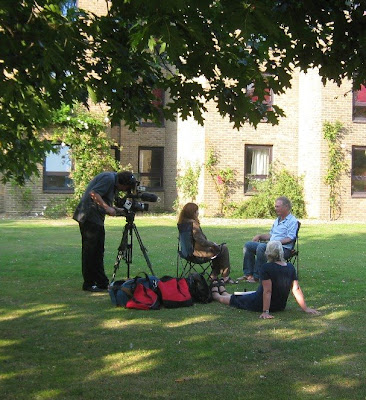 ... and then the daily briefings with various bishops and conference leaders ... here a TEC briefing with Bishops Kirk Smith & Cathy Roskam. 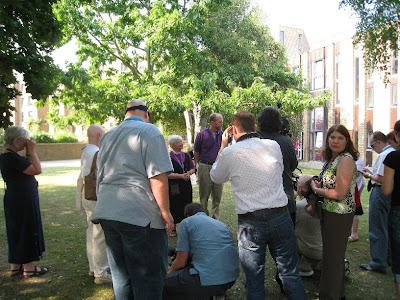 But in between, there's a whole lot of Bible Study, Indaba Reflections and worship services that do NOT breaking news make.
.
As a result, the media is sometimes reduced to finding SOMETHING to report ... even us blogging and checking our email was news for an ITN crew one afternoon ...
. 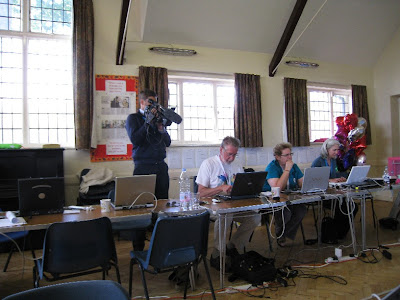 In that context, it's not hard to understand the temptation to manufacture something to report.
.
Yesterday, there was a great moment up on campus when I spied Riazat Butt and Jim Naughton (UK Guardian and Diocese of Washington respectively) on their cell phones gesturing about.
.
I went over to see what was "up" and was told "there's going to be a confrontation and we're trying to figure out where it's going to happen!"
.
Just then, a literal "pack of press" appeared up the path a bit, hurriedly bustling toward the steps in front of Rutherford College. Naturally, we scurried up there, too -- as clearly "something" was about to happen!
.
Cameras and microphones poised, they waited ... and along came Quincy's Keith Ackerman, pulling a rolling briefcase behind him. "Maybe this is it!" the murmur went up ... and they all moved in closer.

+Keith, from the top of the stair case, appeared non-plussed for a moment, but -- being a prayerful guy -- suggested that perhaps since they were all gathered together at least he could pray over them.

And when he finished and prepared to roll on off to whatever appointment he was heading to, one of the reporters hollered out: "Can you raise up your hands again so we can get a photo???"

The story that there WAS no story was about to become a breaking news story.

This kind of thing happens daily around here ... a basically harmless pursuit of "something" to say for those writing on deadline with editors back home in their ear on their cell phones wanting "something" to print.

What isn't so harmless is the other "MO" of manufacturing a story in order to report on it.

For example, this email from a colleague from Oasis, California who was in the press room this morning:

There's a man telling reporters that the address last night did "not go down well" and only was met with "polite support." He says the only way Rowan can avoid schism is by demanding that Gene resign -- I guess that is why some of the press keep asking people if Gene will resign.

So what we've got inside the Lambeth press corps are those busy planting the seeds of the story they've already written in their heads and trying to get others to "go and do likewise."

My degree is in theology not journalism, but I'm thinking that's not what they teach you in Journalism Ethics 101 ... and -- given I've just verified the identity of the man in question -- that anybody reading anything in The Living Church should -- at this point -- be doing it with a big-old-grain-of-salt handy.

Posted by SUSAN RUSSELL at 6:00 AM

"My degree is in theology not journalism, but I'm thinking that's not what they teach you in Journalism Ethics 101 ..."

It's pretty clear to this J-school (and seminary) graduate that they've dropped ethics as a course requirement.

Well, I was only on my high school newspaper staff, but if you ain't got the who what where when how and why ("The five W's and the H) then you ain't got a story. Seems to me some of these folks get three W's and make up the rest!