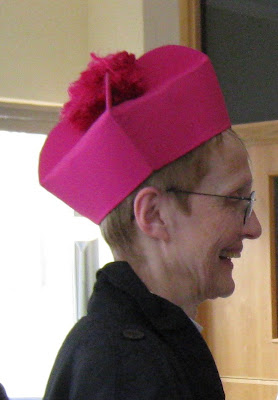 I promised myself an "early-to-bed-for-the-first-time" night tonight but this one is TOO good not to blog on quickly before I pack it in: Marilyn McCord Adams' quite brilliant paper on the Anglican Covenant entitled:

.
Unfit For Purpose
or, Why a pan-Anglican Covenant
at this time is a very bad idea!
.
Excerpts, thanks to Episcopal Cafe:
.
The SAD Situation
The St. Andrew’s Draft Covenant (hereafter SAD) is a very sorry document, and it comes at a very sorry time. SAD is the third in a series of official attempts to redefine the Anglican Communion in a way that would satisfy members scandalized by the events of Summer 2003. Recall (it seems ancient history now) how in July 2003, the General Covention of the Episcopal Church USA consented to the ordination of Gene Robinson, a coupled gay man, as bishop of New Hampshire.
,
About the same time, the diocese of New Westminster in the Anglican Church of Canada authorized rites for blessing same-sex partnerships. These events stirred a furor among sex-and-gender conservatives in the Anglican Communion. The Archbishop of Canterbury (hereafter ABC) responded by appointing the Windsor Commission. The (by now infamous) Windsor Report (hereafter TWR) set down the basic polity frame.
.
"TWR polity does not work."
Not only has TWR-polity been set down on paper three times. Thanks to TWR’s tone of presumptive legitimacy, it has already had ‘a trial run’! The Windsor process against TEC and New Westminster gave TWR-polity a primate-dominant interpretation. If TWR spoke of submitting novelties to the instruments of (comm)union, it was the primates who acted at Dromantine to request that TEC and New Westminster explain themselves at Nottingham and to put TEC and New Westminster on probation.
.
It was the primates who acted at Tanzania to override the report of the Joint Standing Committee and to reject 2006 General Convention’s responses to TWR.
.
It was the primates who issued ultimata that TEC impose moratoria on ordinations and blessings of coupled homosexuals by 30 September 2007.
.
It was the primates who declared foreign incursions (by one province into the turf of another) not to be on a moral par with North American breeches of faith.
.
It was the primates who moved to set up a primatial council to handle appeals from TEC’s conscientious objectors.
.
Even after the Joint Standing Committee had given TEC a passing grade for its New Orleans responses, it was the primates’ estimates that the ABC still sought. Thus interpreted in the enacting, TWR-polity seemed to mean veto power for foreign primates in no way accountable to the province in question.
.
Even as a theoretical sketch, TWR-polity raised liberal eye-brows. Pessimistic liberals believe what experience teaches: that human beings are neither smart enough nor good enough to be entrusted with very much power. Actions speak louder than words. For liberals, the ABC’s and the Primates’ behavior towards TEC demonstrated that their fears were justified. Note once again: legal authority is a red herring. All of these actions have been taken, not only without legal authority, but independently of anyone covenanting to anything.
.
To put it bluntly, the behavior of the pan-Anglican instruments towards TEC and the Anglican Church of Canada has been abusive. For liberals, recent past experience shows signing on to NDC or SAD to be a sure recipe for abuse of power!
.
For sex-and-gender conservatives, the North American saga shows the bankruptcy of TWR-polity for settling intra-communion disagreements over essentials. From their point of view, the process did not deliver the desired result: the repentance or excommunication of TEC and New Westminster. Sex-and-gender conservative primates number among the just under half who rejected TEC’s New Orleans responses as unsatisfactory. From their point of view, the ABC fudged the process, just when it should have proceeded towards excommunication.
.
In the face of division among the primates, the ABC did not call a Primates Meeting. Neither did he proceed towards excommunication on his own authority. Instead, the ABC changed the format of Lambeth from that of a resolution-passing council into a retreat with small group Bible studies and discussions, and proceeded to invite all of the TEC bishops except for Gene Robinson himself.
.
Recent past experience proves to sex-and-gender conservatives that TWR-polity --which leaves with the ABC power to determine Anglican Communion membership, power to call Primates’ meetings or not, and power to determine the composition of the Lambeth Conference--is unfit for purpose. TWR-polity simply does not work!
.
GAFCON buries SAD
In any event, the ABC’s plea for patience is not apt to be heeded. GAFCON’s manifesto, not only buries SAD. By ‘upping the ante’ for any covenant ‘confessing Anglicans’ would sign, GAFCON’s concluding statement is a recipe for ‘walking apart’. The reason is that GAFCON is insisting on conservative polity and conservative content. Conservatives can live with liberal polity so long as they have the majorities needed to dictate institutional policy. The current crisis arose, because in The Episcopal Church and New Westminster, sex-and-gender conservatives have lost such majorities.
.
Liberals can live with conservative content, if liberal polity holds out hope of working from within to change institutional policy. Liberals have lived with conservative sex-and-gender policies for centuries, but now--in TEC and New Westminster--their hour seems to have come. The trouble is conservatives cannot live with liberal polity and liberal content. Neither can liberals live with conservative polity and conservative content. GAFCON’s clear lines in the sand already count liberals out!
.
Posted by SUSAN RUSSELL at 2:00 PM

Liberals can live with conservative content, if liberal polity holds out hope of working from within to change institutional policy.

But, of course, the hope can never be realized without provoking schism from the conservatives; And, that's no hope at all.

It's always been like this.
Progress is only ever achieved when liberal ideas become so commonplace in society and in the church that they are no longer seen as cutting edge and dangerous, and when they are slowly becoming mainstream enough for conservatives to assimilate them.