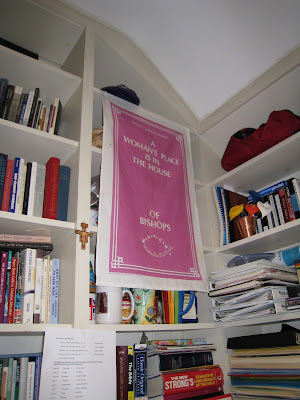 And here's from Joy Carroll Wallis ... her own reflection on:

A Woman's Place is in the House ... of Bishops

On Monday, July 7, the general synod meeting in York, England finished the job. At long last they have approved that women may also be consecrated as bishops--jettisoning the custom of a male-only episcopacy.

When women were first admitted to the priesthood in 1994, the synod passed various "safeguards" and "provisions" that included "flying [male] bishops" to serve those opposed to ordaining women. That year, I made an impassioned speech against those "provisions." This time, the women clergy made it clear to the House of Bishops that they wanted women to be bishops, but not at any cost. In a statement issued in May 2008, the women clergy said:

The price of legal "safeguards" for those opposed is simply too high, diminishing not just the women concerned, but the catholicity, integrity and mission of the episcopate and of the Church as a whole. We cannot countenance any proposal that would, once again, enshrine and formalize discrimination against women in legislation. With great regret, we would be prepared to wait longer, rather than see further damage done to the Church of England by passing discriminatory laws. ... If it is to be episcopacy for women qualified by legal arrangements to "protect" others from our oversight, then our answer, respectfully, is thank you, but no.

This incredible and historic decision that the synod has made is all the more wonderful to me because the legislation contains no "safeguards." It has simply a compassionate "code of practice" to be worked out over the next few years.

No women will be consecrated as a bishop until the year 2014 and in the meantime, "arrangements" will be embodied in the code of practice for those who feel bereaved and betrayed by the raising of women to the episcopacy.

It is finally done! And this time I trust that the legislation will pass the test of theological integrity. I doubt that the fallout will be as bad as some have predicted. Many who threatened to leave the Church of England if this legislation passed have already decided to reconsider.

Over the past 14 years of women in priesthood, many gracious and wise women priests have gained a lot of experience in building trusting relationships with those unable to accept their priestly ministry. I have no doubt that those eventually appointed will take this experience into the episcopate. They will do their jobs as shepherds, teachers, and unifiers with prayerful compassion and generosity.

Joy Carroll Wallis was among the first women to be ordained to the priesthood in England in 1994. She's the author of The Woman Behind the Collar: The Pioneering Journey of an Episcopal Priest. Carroll Wallis lives in Washington, D.C., with her husband (Sojourners editor-in-chief Jim Wallis) and their two sons, Luke and Jack.

Posted by SUSAN RUSSELL at 3:04 PM

I am sooooo very, very proud of you, Susan, even beating out theological spinmeister Kendall Harmon (who gave us the terms "reappraiser" and "reasserter." and brainiac Ephraim Radner.

You are awesome, my dear. I know I'm not the only one to watch you, fast on your feet and yet completely on message, completely awestruck and slack-jawed, as you speak truth to power.

Can you tell I'm a HUGE fan? Shamelessly so.

I let out a cheer when I saw the list this afternoon.
I raise my cup of tea to you and your placement!

(I also want one of those towels.)