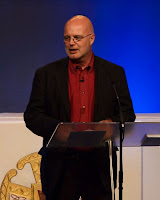 Readers of this blog will remember that I'm a BIG Brian McLaren fan and so I was thrilled that he was going to be one of the plenary session speakers at this Lambeth Conference.
.
That session was last night and here's a report from Arizona bishop Kirk Smith, thanks to Episcopal Cafe.

Tonight, in a plenary session, we heard Brian McLaren's presentation on the dynamics of making disciples in a rapidly changing world. His point, not a new one but one which he convincingly presented, is that the ways of the modern world, to which the Church for five hundred years has accommodated (or over-accommodated) are losing their currency.
He also suggested that in the three basic cultures in place in the current world--non-modern, modern, and whatever it is that you want to call the one after that--the Church has yet to find a voice. He pointedly challenged this Conference to work in finding one, saying that the Anglican way has within it distinct gifts to do so.
The coexistence of the three cultures, he also said, has in it the makings of many of the conflicts in a world-wide communion like ours. A long evening well spent
Posted by SUSAN RUSSELL at 3:41 AM

Susan,
Bishop Gene in his blog, Canterbury Tales from the Fringe, says that you "knocked one out of the park" with your sermon at the 'inclusive opening service'. Is there any where that we can 'hear' that sermon? It is good to know that our Bishop is surrounded by all of you familiar voices!
Many are praying for you all here in NH!

As I have said before, the Episcopal Church should make an extraordianary effort to reccuit McLaren into its leadership by offering him ordination to the priesthood and eventaully, the episcopate. We need this man as a priest and pastor among us.