Jesus Saves ... From the Myth of Redemptive Violence

My Good Friday sermon is now up on YouTube ...

In some ways it's arguably the same Good Friday sermon I preach every year ... part of my life-long vocation of debunking substitutionary atonement one Good Friday at a time.

But I also felt this year -- in the shadow of this crazy election season and the violent extremism dominating our news cycles -- that it was particularly germane to tackle (once again) the Myth of Redemptive Violence that I learned about from Walter Wink 20 years ago. A myth that still masquerades as reality. From the sermon text:


Anyone who thinks that Domination System is not alive and well listening to the rhetoric on the election campaign trail or watching the evening news with its onslaught of violence begetting violence, in thought, word and deed. In terrorist bombs in Belgium, Turkey and Nigeria and in gun violence in the streets of Pasadena; in policies that endanger our planet and incarcerate our youth; in state sponsored discrimination against LGBT people and in court decisions that strip communities of color of their voting rights. I could go on and on.

This violence – in thought, word and deed -- is the Domination System Jesus came to dismantle -- and the truth we face is that two thousand years later the same Domination System which conspired to kill Jesus on Good Friday is still conspiring to co-opt the Christian narrative intended to overcome it.

And that -- I believe -- is the work of Easter: to resurrect the authentic narrative of Jesus' life, work and witness from the tomb of dogma, doctrine and domination where the institutional church tried to hide it.

Because (stop me if you've heard this one before:)

Posted by SUSAN RUSSELL at 1:42 PM No comments:

Update on "As the Anglican World Turns" 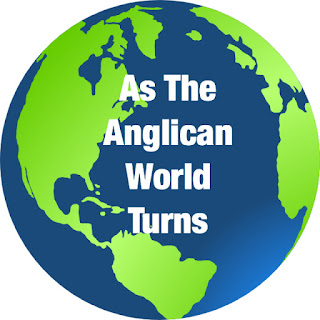 The Anglican Consultative Council is meeting in Zambia this week and the Standing Committee of the ACC just issued an opening statement which began:

So now we wait for the breathless, breaking news headlines that the Episcopal Church has in fact NOT been voted off the Anglican Island, that the Primates got out over their skis and overreached their authority in their Communique  and that the work and witness of the Anglican Communion continues under the leadership of those who refuse to let differences between our various churches become divisions in our common mission.

We wait. But we don't hold our breath.

As Rachel would say: Watch this space.
Posted by SUSAN RUSSELL at 9:07 AM No comments:

Let me start this little lunch-break blog by reiterating that whoever the Democratic nominee is he/she will have 110% of my support because the alternative is quite simply not an option. And that I am on record as a Hillary supporter for reasons outlined here on March 1 in a post that included these words:


I am impressed with Bernie's ideas.
I am inspired by Hillary's leadership.

I have worked really, really, really hard to stay out of the downward spiral of negative energy that seems to have leaked over from the other side of the aisle into our campaign. I want to focus on why I support Hillary -- not why you shouldn't support Bernie. And then we'll all vote and/or caucus as the case may be and go to Philadelphia and organize and mobilize to win in November.

ICYMI, the latest kerfuffle in the Longest Primary Election Cycle Ever is a "he said/she said" fight between Sanders and Clinton over who is "qualified" to be President.

It appears to have resulted from an interview wherein Joe Scarborough was pushing from nine ways to Thursday to get Hillary to say that Bernie wasn't qualified to be President ... bait she refused to take finally ending the back-and-forth with this "high road" comment:


"I will leave it to voters to decide who of us can do the job that the country needs, who can do all aspects of the job, both on the economic domestic issues and on national security and foreign policy." (you can read the fact-checker transcript here.)

Unfortunately, Bernie's response was to put into Hillary's mouth the words Joe was trying to get there by saying she called him unqualified -- and then all social media hell broke loose.

At this point, either you know all this because you're following the race or you've quit reading because you don't care. But here's my bottom line:

What is at stake in this election is way too important for us to tearing each other apart so the other side can pick up the pieces. Don't agree with Hillary? Don't vote for her. But let's not for a minute confuse "I disagree with her policies" with "She's not qualified." 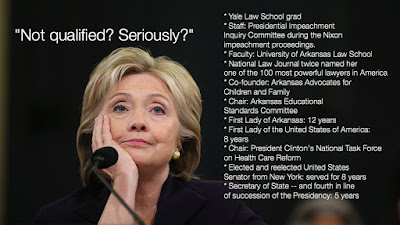