Well, it's official. In a press release received earlier today, Consultation Convener Laura Russell announced the official dissolution of Integrity USA and its withdrawal from the progressive Episcopal consortium:

The Consultation, a consortium of progressive organizations in the Episcopal Church, has received word that Integrity, Inc. has withdrawn its membership in The Consultation. Integrity has been a charter member of the Consultation since 1985.

On March 21, Ronnie Ward, president of both Integrity, Inc. and Integrity Americas, Inc., notified Consultation convener Laura Russell, “Since Integrity, Inc. is now in the post-dissolution winding-up phase, the organization is withdrawing as a constituent member of The Consultation and will not be sending a representation.” The dissolution of Integrity, Inc.’s corporate status began in January and the withdrawal is part of that process.

Russell responded, “We sincerely regret losing one of our charter members.”

The Decline & Fall of Integrity USA has been an ongoing process for over a decade. In the years since Louie made that first fateful 1974 phone call to Grace Cathedral, the organization founded in response to his call to "restore Integrity" to TEC regarding God's LGBTQ beloved served brilliantly at times -- and blunderingly at others.

Like the old wineskin of parable fame, its organizational structure had outlived its efficacy as a container for the new wine of LGBTQ activism necessary to meet the challenges we face as we continue the work of dismantling all that stands in the way of making full inclusion not just a resolution but a reality.

One contextual reminder is that Integrity was for most of its existence not the "only game in town" in the Episcopal Church working for LGBTQ inclusion. The Oasis Ministries, Beyond Inclusion, Claiming the Blessing, the Chicago Consultation & various diocesan and parish based advocacy organizations worked long and hard -- and if we're honest, sometimes at cross-purposes and competitively -- to bring us to where we are today: far from where we started and not yet done.

So moving ahead, there will -- I believe -- similarly be room for multiple ways to work together. The end of one nonprofit is neither the end of the world nor the end of the movement.

Yet today's news is a moment to pause and mark the end of a chapter in that work that continues. For many it is a moment marked with both grief and relief as we hold in tension both the good works and failings of the past -- and recommit ourselves to the work that is more important than any individual or organization.

It is also a good chance to share this 2 minute history of "how we got from there to here" ... beginning in 1974. No history that short can be comprehensive -- but it does provide an overview of both the legislative and programmatic history which I hope will be useful to consider as we think about next steps and therefores as we move together into God's future. 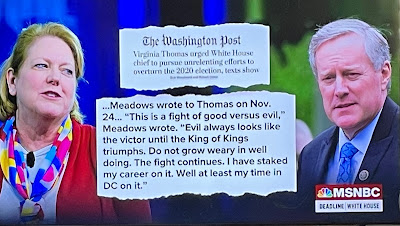 I learned that there is no compromising with those who believe they have Sole Possession of the Absolute Truth.

I learned that while we were meeting to negotiate how we would move forward together in spite of our differences, they were orchestrating an exit-strategy that involved litigation, property disputes and the demonization anyone and anything that challenged their patriarchal worldview.

I learned that the same theocratic zealotry that infused the Puritans who abandoned the Church of England because of its comprehensiveness in the 17th century was ironically alive and well in the 21st century -- attempting to reinvent Anglicanism in its own image: straight, White, male-dominated and biblical literalist.

I learned that part of their playbook was to attempt to gaslight the rest of us into the fiction that they were the ones who were the victims here -- an assertion that flies in the face of the reality that there is an ontological difference between feeling excluded because you are disagreed with and being excluded because of who you are.

And I learned that unexamined privilege can be an insurmountable impediment to embracing diversity as a gift rather than attacking it as a threat.

Nevertheless, we persisted.
We resisted.
And now it's time to board up and do it again.

It is time to use all that we learned in the Anglican Inclusion Wars to resist the Christian Nationalist assault on our constitutional democracy ... an assault brought front-and-center this week with the breaking news of the text thread between SCOTUS spouse Ginni Thomas and former White House Chief of Staff Mark Meadows.

If you need some background, there's this March 14, 2022 CNN piece which begins:

"Conservative activist Virginia "Ginni" Thomas said in an interview published Monday that although she attended a rally on January 6, 2021, she "played no role" in planning the events that day and that she doesn't involve her husband, Supreme Court Justice Clarence Thomas, in the political work she does pushing conservative causes."

But then there was this Washington Post opinion piece by Greg Sargent [March 25, 2022]:

Meadows texted to Ginni Thomas that the “King of Kings” would ultimately “triumph” in the quest to overturn the election, which Meadows characterized as “a fight of good versus evil.” Thomas, a longtime conservative activist, replied: “Thank you!! Needed that!”

“Think about the sickness of this,” Joe Scarborough said Friday. “He summons the name of Jesus Christ for his help in overturning American democracy!”

The sentiment is understandable. But what this level of shock really indicates is this: We haven’t paid enough attention to the role of right wing Christian nationalism in driving Trump’s effort to destroy our political order, and in the abandonment of democracy."

And there was this from a March 24, 2022 segment on The Last Word with Lawrence O'Donnell: 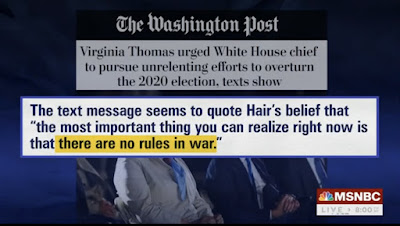 "There are no rules in war."

These are not just good people of deep faith with different opinions than ours.

These are not just politics-as-usual people.

These are cut-the-baby-in-half if we can't have it, "there are no rules in war" people whose conviction that they have Sole Possession of the Absolute Truth makes them a danger we cannot afford to ignore if we're doing to keep our constitutional democracy from devolving into a theocratic oligarchy.

This is not a drill.
Resist. Persist. Repeat as necessary.
La lucha continua

A footnote: While Ginni Thomas converted to Catholicism in 2002, she was an active parishioner at Truro Episcopal Church in Fairfax, Virginia ... where Martyn Minns was in the forefront of the Inclusion Wars and which eventually left the Episcopal Church, joining the Convocation of Anglicans in North America (CANA).

Posted by SUSAN RUSSELL at 2:19 PM No comments: