Actually, yes ... we do understand Mr. Trump. We totally understand. 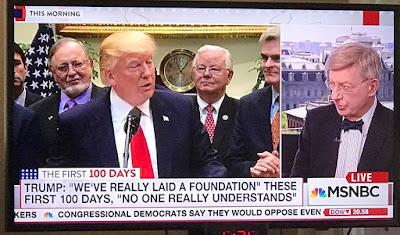 Actually, we totally understand. We really do.

We understand that the last 100 days have been about dismantling the foundation of our historic constitutional democracy in a concerted effort to lay a foundation for greed, graft, oppression and oligarchy.

Oh, we understand, Mr. Trump. That's why we're resisting. And will continue to resist at every turn the "foundation" you are attempting to lay.

Check us out on May 1st when we're back in the streets -- because we TOTALLY understand what is at stake here. La lucha continua and #SiSePuede

Posted by SUSAN RUSSELL at 10:55 AM No comments:

Science is a Thing: Reflections on 20 Years of Love in Action 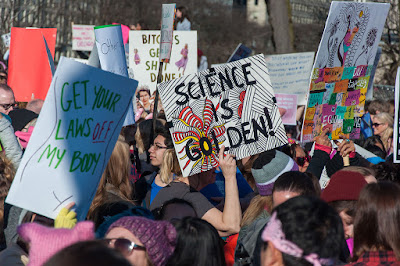 I write this on a jet somewhere over Nebraska while millions of people gather in the streets around the globe to remind themselves and each other that science is a thing.

Homeward bound from Cincinnati after an Episcopal Communicators conference I am struck by the irony that the ability to wake up in Ohio and be home in time for lunch in Los Angeles -- and to both write and post a blog from a laptop linked to in-flight wifi -- is all because of the science people are taking to the streets to remind themselves and each other -- and their elected officials -- is a thing.

Twenty years ago I had the honor to gather in Cincinnati for another conference ... the JPIC (Justice, Peace & Integrity of Creation) Summit -- sponsored by the Episcopal Church and bringing together hundreds of people from around the world -- including Ambassador Juan Somavia of Chile Samovia said in his keynote speech.


"The world is going through a period of increasing moral indifference to the plight of others, marked by a win-at-all-costs mentality -- and therefore we must assert our fundamental belief in the dignity of every human being."

And so today as I fly home from one conference and remember another, I also remember these words from the sermon Verna Dozier preached at our closing Eucharist twenty years ago.

"You are a peculiar people," she said -- in what would be one of her last public appearances as she struggled with Parkinson's Disease. "And by the grace of God may we always remain so." Reminding participants us that we were "change agents," Dr. Dozier said:


"Let the word go forth -- you have set your sights on General Convention, not as politicians but as people of the Spirit. Too often "we make statues of justice, honor them, and then consider our duties discharged," she added. "We must not distance ourselves from those for whom we do mercy ... for justice is love in action."

We are still a peculiar people -- gifted with the understanding that faith and science are not protagonists but partners in how we understand our journey in the realm we name as "this fragile earth, our island home."

And so I pray today -- somewhere over Nebraska in a jet plane with in-flight wifi -- that the same commitment that fueled us to leave Cincinnati twenty years ago called by Verna Dozier to remember that justice is love in action will fuel our work in the days, weeks and months ahead as we engage in this movement of Sacred Resistance -- taking to the streets as necessary.

That we will use that love in action to challenge moral indifference to the plight of others wherever we find it; refuse to succumb to a win-at-all-costs mentality; assert our fundamental belief in the dignity of absolutely every human being; and remind ourselves -- and everyone else -- that science is a thing.
Posted by SUSAN RUSSELL at 8:18 AM No comments: