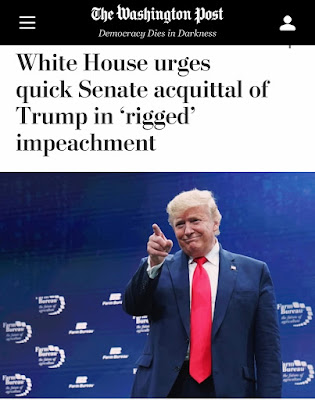 So because there is
literally no defense
for his abuse of power
and obstruction of Congress
his defense team will offer none
and ask the American people
to unsee what they have seen
and unhear what they have heard
and pay no attention
to the man behind the curtain.

So whatever the Senate does or doesn’t do
it is our job to
organize
mobilize
and unify
to end this nightmare
and get back to the work
of making the aspirational dream
of liberty and justice for all
not just a pledge we make
but a reality we live.
Posted by SUSAN RUSSELL at 11:40 AM No comments:

"To every thing there is a season, and a time to every purpose under the heaven." 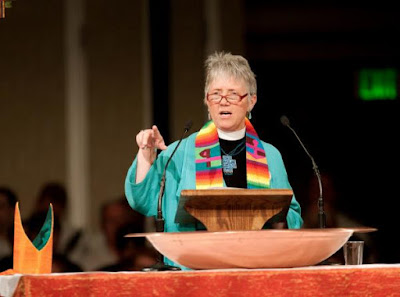 Because I'm a queer fish who swims in the Episcopal pond, my email, voice mail and social media feeds have all been full of the latest breaking news of the turmoil and challenges facing Integrity ... the 40+ year old advocacy organization committed (at its best)  to the full inclusion of all the baptized in all the sacraments ...and with questions about what I have to say about it. Here's what I have to say.

I spent nine years on the Board of Integrity ... three as Communication Director under the leadership of the inimitable Michael Hopkins (2000-2003) and six as President of Integrity during what can arguably be described as the height of the Inclusion Wars (2003-2009).

It was an era that included:

I offer that quick review in part to say that this is not my first rodeo ... and in part to emphasize that the struggle for full inclusion has been long, has always been messy and -- for all the progress we have made over the last 40 years -- is far from over.

And ... to every thing there is a season.

So in answer to all those emails, voice mails and social media posts asking for comment on the current "Integrity troubles" here are my two cents:

I think it's time to let it go.

I think the institutional container that was created in the 70's & 80's to provide a place of refuge and community on the margins of the church and which led to the empowerment of activists in the 90's & 00's to stand up, speak out and be agents of the change they wanted to see in the church and the world has outlived its capacity to do the work in front of us in this present era and prepare us to do the work ahead of us as we move forward into God's future.

This is not because of what one president, board member, treasurer or executive director did or didn't do. It is not a conclusion I've come to in the last days, weeks or months -- indeed it is a position I held in 2012 when an intergenerational visioning team gathered in Pasadena to consider Integrity's future and articulated again in 2018 when a group of past-presidents were invited into a conversation with the then-board.

In an analogy I've used before, for me it is like the history of the women's suffrage movement -- which organized, strategized and eventually achieved the goal of Votes for Women.

Achieving that goal required a particular organizational structure and strategy ... a structure and strategy that was finally and thankfully successful. And -- when the goal had been achieved -- there was still work to do. The work of dismantling sexism, confronting misogyny and taking down the patriarchy in all its forms. Work that continues today. Work that calls for different strategies and structures than ones our grandmothers and great-grandmothers used to get us the vote. Work that continues today with the League of Women Voters -- the new organizational structure that rose up out of the sun-setting of the Women's Suffrage Association

In my experience, Integrity has been the most effective at building grassroots organizing structures to influence ground breaking changes in the Episcopal Church through legislation that has made us a church where the full inclusion of all the baptized in all the sacraments is not a soundbite coming from the margins but the position preached by our Presiding Bishop and the policies written into our canons.

No, we're not done yet.
Yes, we have miles to go before those aspirational goals become a reality for everyone in this church we love, serve and challenge.
And ... to every thing there is a season.

In this season, I am persuaded that the old wineskins of Integrity USA's organizational structure are neither adequate, sufficient nor capable of equipping us for the work we are being called to do.

And, in this season, my hope and prayers are that collectively we can find a way to celebrate the accomplishments of the past while we work together to reimagine the work moving forward.
Posted by SUSAN RUSSELL at 1:43 PM 2 comments: