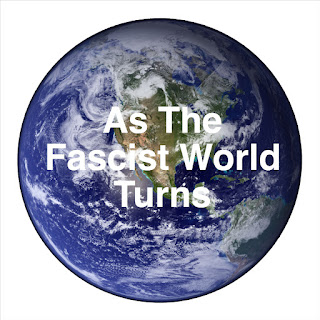 ICMYI ... news of this move right out of the Fascism 101 playbook broke yesterday in the Washington Post:


The Trump administration is prohibiting officials at the nation’s top public health agency from using a list of seven words or phrases — including “fetus” and “transgender” — in official documents being prepared for next year’s budget.

Policy analysts at the Centers for Disease Control and Prevention in Atlanta were told of the list of forbidden words at a meeting Thursday with senior CDC officials who oversee the budget, according to an analyst who took part in the 90-minute briefing. The forbidden words are “vulnerable,” “entitlement,” “diversity,” “transgender,” “fetus,” “evidence-based” and “science-based.”

The news prompted my brilliant friend Dr. Susan Thistlethwaite to issue this challenge: 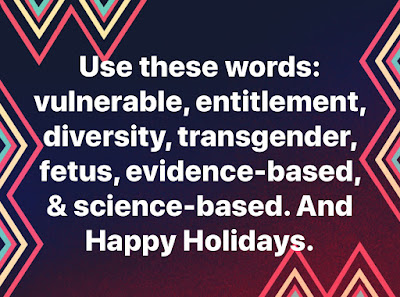 And the idea of Banned Words With Friends was born.

SO ... since we're in Advent and the Magnificat is echoing in my heart and mind, here's my rise to Susan's challenge:


He has cast down the mighty from their thrones of entitlement
and has lifted up the vulnerable.
He has filled the hungry with good things —
like an evidence/science-based strategy to end global warming —
and the rich he has sent away empty.
He has come to the help of his servant Israel
for he remembered his promise of diversity,
the promise he made to our transgender siblings,
to Sarah and her fetus forever.

Your turn ... Happy Holidays!
Posted by SUSAN RUSSELL at 10:02 AM No comments: