A Thank You Note for The Respect For Marriage Act 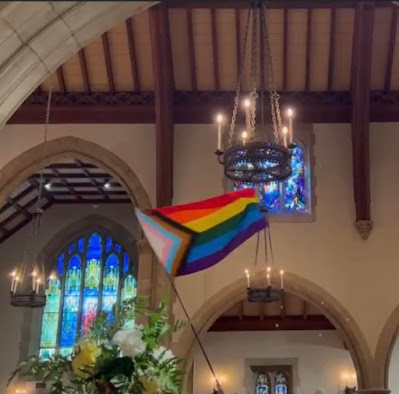 Every week All Saints Church puts its faith into action on an issue in alignment with the Gospel values of love, justice and compassion. This week we’re sending a thank you letter to President Biden & congressional leaders for the Respect For Marriage Act, signed into law this week. Here’s the letter:

We write today to express our heartfelt gratitude and deep appreciation for your leadership in the historic movement forward for LGBTQ equity represented by the signing this week of the Respect for Marriage Act.

As members of All Saints Church in Pasadena, we have been in the forefront of decades of struggle for LGBTQ equality — and this year we marked the 30th anniversary of the blessing of the first same-sex union in our congregation. Advocating for the full inclusion of LGBTQ people in our church and for their equal protection in our nation has been a core value of our commitment to put our faith into action. And our commitment to that struggle is deeply rooted in our baptismal promise to respect the dignity of every human being.

As Christians we believe we have a responsibility to both act on that promise and to speak out and stand up when the faith we profess is hijacked and used as a weapon of mass discrimination against LGBTQ people. Religious liberty is a bedrock of our country and a right cherished by Americans of many faiths.

But disguising homophobia as religious freedom is not only a gross distortion of the teachings of Jesus, it is a dangerous legal precedent. Religious liberty is not the liberty to impose your religion on everybody else – and equal protection is not equal protection unless it protects all Americans equally.

And so, while we celebrate together the momentous step forward represented in the Respect for Marriage Act, we also urge Congress and the President to continue efforts toward finishing the work by supporting the Equality Act – which would explicitly prohibit discrimination based on sex, sexual orientation, and gender identity.

Many years ago, our rector emeritus George Regas challenged us to “set audacious goals and celebrate incremental victories.” The audacious goal of liberty and justice for all will remain aspirational in our nation until we finish the work of securing equal protection for those who have been historically marginalized. Nevertheless, we celebrate the incremental victory of the Respect for Marriage Act and offer our thanks to the President and Congress for their leadership in making it happen and pledge our continued support to them for the work ahead.

Posted by SUSAN RUSSELL at 11:08 AM No comments: 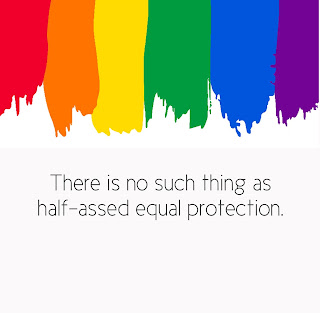 Another Monday, yet another opportunity to listen to Nina Totenberg dissect yet another Supreme Court case deciding whether the equal protection guaranteed by the Constitution to all Americans equally protects LGBTQ Americans.

And yes, I am grateful for the Respect for Marriage Act wherein DOMA is finally actually repealed and federal protections for marriage rights are provided EVEN if SCOTUS goes rogue and Kentucky or Ohio or Florida or pick-your state acts up.

It's both a backstop to protect extant rights and a beachhead to regroup and get the Equality Act through when we retake the House and get a filibuster proof Senate.

Nevertheless, it is exhausting to continue to have your life, your relationship, your family and your equal protection a subject of ongoing debate.

So it might be a good week to offer the LGBTQ folk in your lives a little extra TLC. And if you’re part of the rainbow tribe to offer yourself a little self-care. Because clearly la lucha continua. And there are miles to go before we rest.
Posted by SUSAN RUSSELL at 10:12 AM No comments: