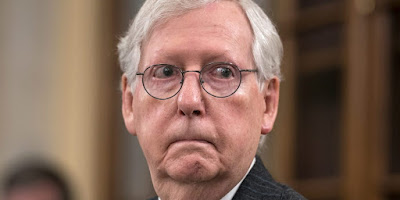 Today Senate Republicans added insult to the list of injuries being inflicted on our democracy by blocking the creation of a commission to investigate the January 6 Insurrection that killed one police officer and injured many others -- an action they took on the very eve of the weekend dedicated to the memories of those who have given their lives in defense of our country. They may be trying to kill democracy but they are keeping irony alive and well.

The shameless will to preserve partisan power over every other consideration has become more and more evident every day -- and the sad reality that there is literally no room for compromise of any kind in the worldview of Leader McConnell and his get-in-line-behind-the-Beloved-Leader crew of sycophants has to be faced head on by Democratic leadership.

I was raised by Republicans. I was one until 1992. And there is much I now disagree with, fight against and have abandoned along the wayside of the policies and premises I was raised with.

However, as much as my GOP Daddy and I would disagree about a whole boat load of things if he were still alive today, I guarandamntee you he is not only spinning in his grave over what McConnell et al have done to his Grand Old Party: he is fixing to haunt them until their dying day for what they are doing to the democracy he held sacred as a WWII veteran and a true patriot.

If we cannot find 10 Republicans willing to choose country over party over investigating armed insurrection against our Capitol,then bipartisanship has flatlined and it's time to pull the plug on the filibuster in order to get on with the work of the people, by the people and for the people. 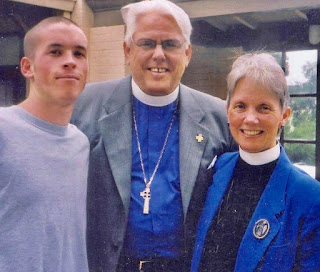 In the week since the phone call came with news of the sudden and unexpected death of J. Jon Bruno, there have been many opportunities to share our stories, post our photos and express our grief at losing someone who was at the center of so much for so many for so long.

The chronicle of his life written by Bob Williams for the Episcopal Diocese of Los Angeles website does a brilliant job of memorializing the scope of his work and witness: starting with growing up as an Angeleno and then growing into his calling as a priest and pastor, advocate and activist -- and eventually as the Bishop of Los Angeles.

Since that job has been done and done so well, my remembrances are personal. My relationship with +Jon went back to when he was serving at St. Patrick's in Thousand Oaks and I was the parish secretary up-the-road at St. Paul's in Ventura. We served on the Stewardship Task Force together, worked Cursillos together and rooted for the Dodgers together ... in good years and in bad.

I remember the day I got the news that he was going to continue to run for Bishop of Los Angeles with a nomination from the floor -- and that David Anderson (then Rector of St. James in Newport Beach and the guy who was always at the other microphone on the convention floor when issues of LGBT inclusion were under debate) was supporting his nomination.

I picked up the phone and l left him a message that I had a question for him.

He called me back almost immediately. My question was -- to put it bluntly: blunt. "I heard that David is supporting your candidacy and before I can figure out who I'm supporting need to know from you whether you've cut some kind of Griswoldesque deal with him that involves the word "abstain." (This was not long after Lambeth 1998 when +Frank Tracy famously abstained on Lambeth 1.10)

Jon's answer was he had not cut any kind of "deal" -- that David knew where he stood on the issues they disagreed about and the only thing he'd promised was that there would always be a place at the table for people who disagreed with him. And he asked me for my support. And I gave it to him.

And he became the Sixth Bishop of Los Angeles. And the journey continued.

He was there for my family as a pastor when my younger son was going through his roughest patches after his "summer of bad decisions" and he was there for me as a brother-in-the-struggle through General Conventions and Lambeth Conference and innumerable confabs and conferences as we struggled to make "full and equal claim" for LGBTQ people not just a resolution we passed but a reality we live in this church. La lucha continua ... the struggle continues ... but we are without a doubt further along down the path because of the work and witness of J. Jon Bruno.

Dodger Games and Garden Parties; Clergy Conferences and Conventions; Protest Marches and Pride Parades ... the scrapbook is full of photos and the heart is full of memories on this day we celebrate his life and grieve his passing. May his memory be for a blessing and may we be given the grace to continue his legacy of love, justice and compassion in our beautiful and broken world.

Give rest, O Christ, to your servant with your Saints: where sorrow and pain are no more;

neither sighing, but life everlasting. Amen.

Posted by SUSAN RUSSELL at 12:22 PM No comments: