On the Eve of a New Era

"It's about a better world now and the best world over yonder. It's about both. It's about transforming this earth so that they will be done on earth as it is in heaven." -- Bishop Michael Curry 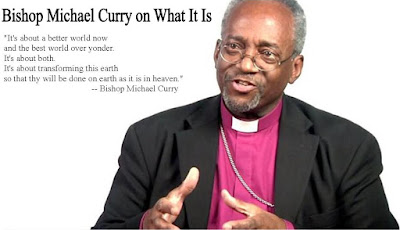 Count me in as a big Michael Curry fan. Love his energy, passion and focus on both proclaiming and exemplifying the Good News of God in Christ Jesus.

I love his commitment to the church as movement rather than institution -- the dream of God so expansive that the church has settled again and again for worshiping rather than following Jesus to make the dream come true. I swear half the time he opens his mouth and Verna Dozier comes out.

I was convinced from the moment I knew he'd agreed to let his name go forward that he was exactly who we need at this time and in this place to lead the Episcopal Church forward into the next chapter of it's work and witness. In fact, I had the chance to quote Esther 4:14 ("for just such a time as this") to him during an encounter in Salt Lake City.

So I'm excited. Part of me wishes I was getting on a plane tomorrow like the boatloads of other friends and colleagues heading to Washington for the Investiture Festivities but this one just didn't have my name on it. I had the privilege of being there in 2006 for Katharine's and it was a huge highlight and milestone. But Sunday is also our parish Feast Day -- and our rector Ed Bacon's final All Saints Day at All Saints Church after 20 years as rector -- so I'm helping hold down the fort here in Pasadena.

Meanwhile, I love the buzz, the energy and the excitement. And I love that even the secular media -- in this case PBS Religion & Ethics Weekly -- is helping us tell the good news of a church ready to rock and roll for Jesus on the other side of the Inclusion Wars. Can't get the embed link to work but check it out online here ... you'll be glad you did.


Posted by SUSAN RUSSELL at 4:27 PM No comments:

ICYMI ..."We should debate on the basis of fact, not fear" 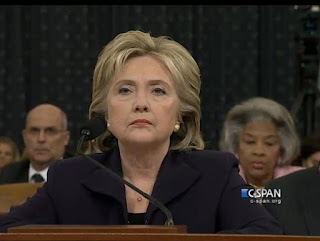 We need leadership at home to match our leadership abroad. Leadership that puts national security ahead of politics and ideology. Our nation has a long history of bipartisan cooperation on foreign policy and national security. Not that we always agree -- far from it -- but we do come together when it counts.

As Secretary of State, I worked with the Republican chairman of the Senate Foreign Relations Committee to pass a landmark nuclear arms control treaty with Russia. I worked with Republican Leader, Senator Mitch McConnell, to open up Burma, now Myanmar, to find democratic change. I know it’s possible to find common ground, because I have done it.

We should debate on the basis of fact, not fear. We should resist denigrating the patriotism or loyalty of those with who we disagree. So I am here. Despite all the previous investigations and all the talk about partisan agendas, I am here to honor those we lost, and to do what I can to aid those who serve us still.

And my challenge to you, members of this Committee, is the same challenge I put to myself.

Let’s be worthy of the trust the American people have bestowed upon us. They expect us to lead. To learn the right lessons. To rise above partisanship and to reach for statesmanship. That’s what I tried to do every day as Secretary of State. And it’s what I hope we all strive for here today and into the future.

Read the entire statement here.
Posted by SUSAN RUSSELL at 11:26 AM No comments:

"Pasadena Now" Covers Blessing of Animals at All Saints Church

[Pasadena Now | October 4, 2015] “May God bless you and keep you, and fill you with happiness, obedience and health for all the days of your wagging life,” said Susan Russell, Senior Associate of Communications, as she blessed the furry animals that came out to All Saints Episcopal Church near Pasadena’s City Hall Sunday morning for their annual pet blessing.

Catholic, Episcopalian and other Christian denominations hold animal blessings on or near Oct. 4, the Feast of St. Francis of Assisi, the patron saint of animals.

Not all friends were furry though. George, a thirty-year-old turtle, was carried to church in a Converse box by his owner, Keenan Williams. But he came out of the box, and received a blessing, a pat on the head, and an amen, just like all the other animals.

As for Panda the hamster, he came in his cage and stayed in his cage, bobbing up and down throughout the ceremony.

Luke, a eight-year-old dog who usually “channels happiness and enthusiasm,” according to his owner Ann Heil, remained serene and peaceful today, as he lay on the ground under a tree, watching everyone from afar.

This Sunday morning’s skies opened with rain and sunless clouds. Russell thought this would keep the animals away, but it didn’t. Plenty of the community’s animal friends were present to receive their blessing and just as the “blessing stations” opened, a few rays of sun lit up the sky.

It is important, however, to recall the reason why we bless animals on Saint Francis Day, pointed out Ed Bacon, Rector of All Saints. Bacon is the owner of three cats, and in the past, he has owned dogs, birds, and hamsters. “And for one night, a snake,” added Bacon, “before I said, ‘no more.’”

As Bacon’s words were transmitted to the church’s front yard on televisions with large speakers hanging nearby, the animals sat, for the most part patiently, on their owner’s laps, by their sides, or in cages. Mary Stafford tightly hugged her Snoopy and baby Snoopy, stuffed animal pets.

According to Bacon, “the reason we bless animals on Saint Francis Day is we believe that animals are our fellow creatures. They are our siblings in the cosmic family. They have the divine presence in them. They are divine. They are saints.”

Posted by SUSAN RUSSELL at 9:17 PM No comments: 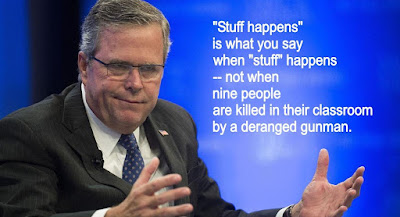 Posted by SUSAN RUSSELL at 10:09 PM No comments: