Traci Blackmon: Where are the dreamers?

I've been a church-goer my entire cognitive life and a priest for 20 years this week.

It would be impossible to count the number of sermons I've heard and a challenge to come up with the most profound among them -- as I have been blessed to receive from many of the most powerful, prophetic and pastoral preachers of our generation.

Her words not only called for persistent vigilance for all of us as we face the ongoing systemic challenges we face as a nation -- they offered a profound reminder of what we are actually called to do as we challenge the church to not settle for what it has become but aspire to what God would have it be.

My words of gratitude fail me. Just watch.

Posted by SUSAN RUSSELL at 10:11 AM No comments:

"The question is, which is to be master?" 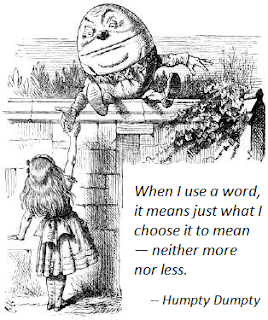 "Through the Looking Glass" is a phrase many of us have defaulted to over these last tumultuous months as we have experienced the normalization of "alternative facts" in the service of replacing our democracy with a plutocracy led by the Narcissist-in-Chief in the White House.

It turns out to be a very apt analogy. Check out this moment between Alice & Humpty Dumpty:

Part of the reason Trump has been untouchable is because he’s been able to define the language and thus owns the situation, normalizing his behavior. The "shithole" situation is a perfect example.

Trump uses an offensive term that’s unacceptable, suddenly everyone is using it, even to criticize him. The word’s automatically normalized. When the word becomes widespread, suddenly Trump’s original comment isn’t as bad anymore because the word has now entered the lexicon. It’s on TV, in conversations, on social media.

We unwittingly buy into that paradigm, and when we do we enter the realm of ideas on HIS turf. He owns the game after that. When we traffic his language were only normalizing his behavior. We’re swallowing it, regurgitating it. It’s dragging us deeper and deeper into the mud and soon we’ll forget what it’s like outside of the filth.

This isn’t a strategy by Trump, but a matter of instinct and obsession/symbiosis with cable news. It’s ever changing talking points that infect daily discourse. When we parrot him, even to mock him, we’re giving power to his vocabulary that not only hurts our culture but moves this battle onto his terms. It’s quiet, but it’s of the upmost importance.

Try your hardest not to give it power. Don’t mock him with his crass, pathetic words. That’s lowering the bar. Attack Trump with the language of a society you’d like to have. Don’t accept this crude, twisted farce he’s creating.

We not only have the power to resist -- we have the responsibility to resist. Because Humpty Dumpty was right -- the question is which is to be master. And we are well and truly in the midst of the struggle to answer that question.

In that struggle it is our call, our challenge and our privilege to refuse to give hatred mastery over love -- to refuse to become the evil we deplore -- to refuse to allow racism, misogyny and oppression in any form triumph over equality, justice and compassion.

It is -- in the words of Assata Shakur -- our duty to fight for our freedom. It is our duty to win.
Posted by SUSAN RUSSELL at 10:20 AM No comments: