Advent Reflections on the War on Truth 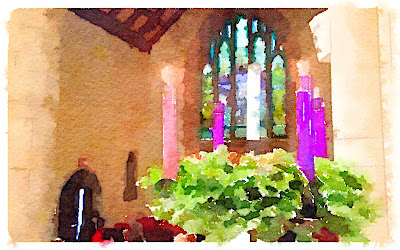 I am old enough that I remember when the statement “You are entitled to your own opinion but not to your own facts” was filed under "overstating the obvious."

It is one of those great quotes I’ve used over the years without ever bothering to research where it came from. Until today. It turns out it is attributed to Daniel Patrick Moynihan -- and it unarguably comes with a haunting quality in this era of poisoned public discourse where “alternative facts” have gone from being a punch line in an SNL skit to standard operating procedure from the current resident of the White House and beyond.

The very fact that “Facts Matter” bumper stickers are a thing is in-and-of-itself a sad commentary on the state of our democracy in specific and the global war on truth in general.

In recent days the NYT Editorial Board offered "The War on Truth Spreads" -- describing how both democratically elected leaders and dictators are systematically undermining the free press -- while Chris Hayes unpacked "The Information Crisis" on his WITHpod podcast and TIME Magazine announced its 2018 Person of the Year: "The Guardians" -- journalists who have been imprisoned or killed in pursuit of the truth.

Journalists like Jamal Khashoggi -- whose brutal murder at the hands of the Saudi regime he was critiquing is being disputed as fact ... in spite of gruesome audio taped evidence of the crime. Meanwhile, climate deniers dispute the fact of the climate change crisis facing our planet in spite of overwhelming scientific evidence to the contrary and the current resident of the White House insists that words which we hear come out of his mouth in archived video footage are words he did not say.

How did we get from the place where the fact that you are not entitled to your own facts was a "given" to this place where data has become an endangered species? How is it that truth seems to be losing the war waged against it?

There are many facets to the answer to that question -- but I am convinced that one of the weapons in the arsenal of the war on truth is the kind of biblical literalism that creates a “The Bible Said It, I Believe It, That Settles It” worldview where science is heresy, where facts and faith are antithetical and where to challenge the patriarchy is to challenge the Godly order of the universe. And that leads to the Lake of Fire and eternal punishment so the stakes are pretty high if you even question -- much less step out of line.

Marinated in a toxic stew of bad religion, patriarchal privilege and internalized oppression it is not surprising that current statistics tell us 30% of Americans believe without question whatever they are told by those they trust -- even when that narrative works against their self-interest. In a context where fact-checking is represented as the road to faithless secularism, truth becomes collateral damage in a war to keep a worldview in place -- and questioning any one groundless assertion is like pulling one card out of the house of cards that could come crashing down ... and that is both terrifying and immobilizing.

And yet it helps to explain -- at least in part -- how a percentage of Americans raised in the bubble of fact-averse biblical literalism accept without question increasingly outrageous "truths" that have no empirical foundation whatsoever.

Obama was born in Kenya. OK.
The climate crisis is a Chinese hoax. Sure.
The presidency of a man who bragged about grabbing women's genitals is God ordained. If you say so.
There was no collusion. Of course not.

The good news is that Daniel Patrick Moynihan was in fact right. Just as you are entitled to your own opinion, the First Amendment entitles you to your own theology -- but nothing entitles you to your own facts. And because facts are a thing -- and because it is a fact that one of the weapons in the arsenal of the war on truth is a weaponized version of Christianity that would give Baby Jesus colic -- it is critical for the rest of us to stand up and claim the promise of John 8:32 ..."The truth will set you free."

The truth is that we have an alternative to the toxic rhetoric of the religious right and if ever there was a time to claim it and proclaim it that time is now. Good people of deep faith can and do disagree about a whole host of issues, ideas and ideologies ... but in the end the question on the final exam will not be who got the theology right but who served the least of these in the name of the one who loved us enough to become one of us in order to show us how to love one another.

The fact is we cannot do that when we allow the Christian Gospel to be hijacked and deployed as a weapon of mass destruction … attacking the truth that there are children in cages on our border and we are turning away refugees seeking asylum to protect a worldview that has nothing to do with the Good News of God’s inclusive love and everything to do with narrow literalism in the service of patriarchal privilege.

And all of this while we decorate our mantles with the crèche celebrating the baby who was turned away from the inn. No wonder Jesus wept.

This year the soundtrack for my Advent season has been this verse of the beloved Advent hymn:

Can it be that from our endings, new beginnings you create?
Life from death and from our failings, realms of wholeness generate?
Take our fears, then, Lord, and turn them into hopes for life anew.
Fading light and dying season sing their Glorias to you.

Here’s hoping that Bishop Barbara Harris is right -- and that one of the endings we’re living through right now is what she calls “the death rattle of the patriarchy – which is not going to go gently in the good night.”

And here’s committing to continue to claim the John 8:32 promise that the truth will set us free. Because the stakes are way too high to settle for anything less.
Posted by SUSAN RUSSELL at 3:47 PM No comments: