by The Right Reverend Sergio Carranza. Bishop Carranza is presently serving as Bishop Assistant in the Diocese of Los Angeles and is the retired Bishop of Mexico. 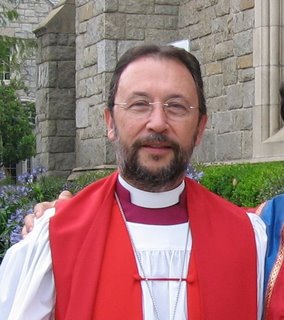 Some Anglicans of the evangelical persuasion want to impose their particular point of view and their way of being on the rest of the Anglican population, as if there were only one way of being Anglican. In order to achieve their objective they have found some weird bedfellows: ambitious minor prelates, frustrated aspirants to the episcopate, wealthy American conservatives and an African Primate afflicted with megalomania.

Each of these individuals has followers and, specially, a private agenda. Claiming to work for unity, they want to enforce uniformity, and all together they create a cacophonous and strident discourse that only serves to confuse the faithful mainstream, the "diverse center" of our Church, and to give rise to an identity crisis.

In the midst of this identity crisis that we are going through as an ecclesial family, we must be reminded often that there is not such a thing as a worldwide Anglican Church, an English equivalent of the Roman Catholic Church, uniform and unanimous, but an Anglican Communion, a worldwide fellowship of autonomous churches in communion with the Archbishop of Canterbury who is not an English equivalent of the Roman Pope.

A classical statement of who we are can be found in the resolutions of the 1930 Lambeth Conference: "This (Anglican Communion) is a commonwealth of Churches without a central constitution: It is a federation without a federal government. It has come into existence without any deliberate policy. They (the Churches) are in the idiom of our fathers, 'particular or national' Churches and they repudiate any idea of a central authority."

In the United States of America we belong to the Anglican Communion only and as long as we are loyal members of the Episcopal Church, the sole and legitimate incarnation of Anglicanism in this country. At the base of our ecclesiology we do not find (yet) a covenant, much less a confession of faith, but the Chicago-Lambeth Quadrilateral. Although we are used to regard it as an Anglican instrument for ecumenical conversations, it is also a way of understanding the basis and the coherence of the Anglican Communion itself: what we regard as essential for Christian unity is what is basic to our own life as a communion of Churches.

At the 1988 Lambeth Conference (which I missed for one year) there was much talk about the instruments of unity, i.e. the structures which keep us together as a Communion. The instruments were identified as the Archbishop of Canterbury, the Lambeth Conference, the Anglican Consultative Council and the Primates Meetings. It was also proposed that there ought to be a common declaration, based, precisely, on the Quadrilateral, which Anglicans all over the world could make. We have to notice that the Windsor Report offers a "Proposal for the Anglican Covenant" (Appendix Two).

It is rather apparent that the detractors of the Episcopal Church seem to have erected some Instruments of Disunion to achieve their purposes: the Archbishop of Nigeria, the Meeting of the Global South Primates, the Network of Parishes and Dioceses, and the Anglican Communion Institute. I fully agree with Canon James A. Newman when he writes: "The identity of the Church cannot be maintained by judgmentalism and condemnation, but by walking the way of Jesus even in the face of hostility. The struggle in our Church today is not really about sex, it's about the courage to face new knowledge and new understandings when they challenge what we have long believed. It's about being open to the power of God to transform us from (being) a people simply of tradition to a people of compassion" (The Quill, April 2005).
Posted by SUSAN RUSSELL at 2:31 PM

Speaking as an Anglican evangelical, I must say that Bishop Carranza really has the wrong end of the stick on this one. I saw that that because, quite frankly, I don't think this issue is about the Anglican style of polity, but what it means to be faithful to the Gospel. I know that liberals as well as evangelicals insist that they are being faithful to what the Gospel teaches and, in a sense, both claims are true. Liberals have been right to call attention to how we treat homosexuals because our treatment has not been historically that of compassion to people troubled by sin (as we all are), but, all too often, it was that of harsh judgement. That is a problem and one that, I think, evangelicals have begun to address, if not to the satisfaction of their liberal opponents, or, I concede, gay/lesbian people in general.

The thing is that Bishop Carranza is, unfairly in my view, reducing this dispute to mere church politics. There is, of course, more than enough church politics involved in this issue, thank you very much, but I'd really like to have some recognition that there are people who have very real issues with the current liberal position (or positions, I know there is variation). If he bothered to address these instead of merely casting aspersions to a pretty wide net of people, perhaps I'd take more seriously what he is saying.

Of course, mind you, that could be my private agenda.

Sergio's comments are a great reflection of his world wide experience with Anglicanism. Thanks Susan.