As the Marriage Equality World Turns 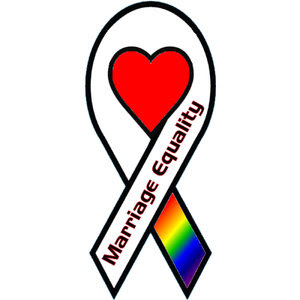 It's been an interesting couple of days in the marriage equality neighborhood.

This morning in Washington DC same sex couples lined up to get marriage licenses as the day dawned on marriage equality for the nation's capital.

Today's "happily ever after" moments come after yesterday's refusal by Justice Roberts on behalf of the Supreme Court to hear equality opponents on the issue. From Marriage Equality Comes to DC:

"It has been the practice of the court to defer to the decisions of the courts of the District of Columbia on matters of exclusively local concern," wrote Roberts, who made the decision without bringing in the full court. Roberts also cited the fact that although D.C. is autonomous, Congress could have passed a bill to disallow the city government from enacting the law, and it did not do so.

Marriages may be performed beginning March 9, as there is a waiting period of three business days after the issuance of licenses.

Meanwhile, Catholic Charities in Washington DC responded by dropping health benefits for ALL spouses in order to keep from providing health insurance to any same-sex spouses. I liked this U.S. Catholic blog on the issue "Defending the family by attacking it."

This situation isn't going to go away either. DC won't be the last government body to recognize same-sex marriages or civil unions. Is our Catholic response going to be always to retrench rather than reach out? DC Charities' decision is a bad sign of things to come. It may on the surface appear to be a principled defense of church teaching about marriage, but in the eyes of many, including its employees, it could just as easily appear both cheap and petty.

Meanwhile, across the pond, the plot thickened for the CofE and ABofC with the House of Lords decision to lift the ban on church weddings for same sex partnerships -- a move widely touted as "wiping out one of the final distinctions between marriage and civil partnerships."

This decision by the House of Lords puts increasing pressure on the Church of England to reconcile the hypocrisy of its position on same sex partnerships, unions & marriage.

And since the CofE is the "established" church in England & there IS no separation of church and state, this ruling in Lords will give added strength to the arguments of what the Brits call "campaigners" that the CofE cannot stand for policies that violate the law of the land. It will make for an interesting Synod (their nat'l "convention") when next they meet.

So here's to love, to equality, to shielding the joyous and to a few more inches claimed toward making that Garden of Eden grow green for ALL God's beloved.
Posted by SUSAN RUSSELL at 8:38 AM

In addition, Mexico City became the first jurisdiction South of the US to allow marriage equality. The RC church there is not happy but so far has not responded as did the archdiocese of Washington by attacking heterosexual marriages.

I suspect that certain Rectors, Vicars and dare I say Bishops and Archbishops will not allow any marriages to be performed in their jurisdictions rather than be forced to solemnify same sex unions.